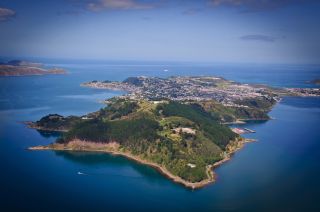 An aerial view of Wellington, New Zealand. A new study shows that the 2016 Kaikoura quake pushed Cape Campbell, on the northern end of the South Island, nearly 14 inches (35 centimeters) closer to the city of Wellington, which sits just across the Cook Strait on the North Island.
(Image: © Shutterstock)

In the two years since a magnitude-7.8 earthquake rocked New Zealand, the country's South Island has slid a smidgeon closer to its North Island.

As the Earth's crust continues to shift after its cataclysmic rupture during the 2016 Kaikoura earthquake, Cape Campbell on the northern side of the South Island has shifted nearly 14 inches (35 centimeters) closer to the city of Wellington, which sits across the Cook Strait on the North Island, said Sigrún Hreinsdóttir, a geodetic scientist at GNS Science, a research consultancy service in New Zealand.

The movement is too slow and subtle to be felt by humans, Hreinsdóttir told Live Science, but she and her colleagues have been measuring it with a combination of GPS sensors and satellite measurements. These measurements reveal that New Zealand is still feeling the effects of the 2016 quake, which killed two people when it struck just after midnight on Nov. 14. The measurements will also help scientists predict what size earthquakes New Zealanders could expect to face in the future, Hreinsdóttir said.  [The 10 Biggest Earthquakes in History]

The Kaikoura quake was mind-bogglingly complex. It hit in a transition zone between two very different geologic regions, Hreinsdóttir said. In general, the country sits right on the edge of a subduction zone, where the Pacific plate grinds under the Indian-Australian plate. The border of this subduction zone runs along the east coast of the North Island. Meanwhile, the South Island hosts a strike-slip fault known as the Alpine Fault, where pieces of crust move horizontally in relation to one another. When the Kaikoura quake hitnear the South Island town of the same name, it ruptured more than two dozen fault lines in the area. One major question, Hreinsdóttir said, is how much of the resulting movement was due to those fairly shallow faults, and how much could be traced back to deeper subduction-zone faults far deeper in the crust.

That matters, Hreinsdóttir said, because when a quake happens in a subduction zone, the amount of area that "breaks" determines the size of the shaking. If New Zealand's active subduction zone extends far south, it could mean that the country needs to prepare for especially large quakes.

So far, the researchers' data suggests that the deep, subduction-zone faults didn't make a big contribution to the Kaikoura quake right as it happened. But that deep interface does seem to be moving post-quake, Hreinsdóttir said.

It's too early to fully understand what that movement means for future earthquakes. Hreinsdóttir and her colleagues have published some of their findings on the post-earthquake movement, including a March study in the journal Geophysical Research Letters. They've observed movement as far as 372 miles (600 kilometers) from the quake's epicenter. Next month, at the annual meeting of the American Geophysical Union, Hreinsdóttir will present updated data collected earlier this year. The researchers will also collect another round of GPS data in 2020, doubling the amount of time they've been following the post-quake movements to date.

The largest post-quake movements have already occurred, Hreinsdóttir said. Now, the earth is still creeping, but the movements are gradually tapering off. Following them into the future, though, will help researchers determine which movements come from the upper crust and which from deeper down. They'll also be able to figure out more about whether the quake put pressure on nearby faults, making a future quake more likely, or took some pressure off other faults, meaning the crust is likely to stay quiet.

"It's always important to monitor and measure what happens after an earthquake," Hreinsdóttir said.