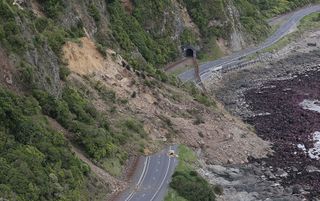 Near the epicenter of the 7.8-magnitude earthquake in New Zealand, a train track and state highway can be seen destroyed by landslide slips.
(Image: © Mark Mitchell - Pool/Getty Images)

A powerful 7.8-magnitude earthquake struck New Zealand early Monday (Nov. 14) local time, triggering a tsunami that hit the coast a couple of hours later, according to New Zealand's WeatherWatch. Aftershocks are still being felt across the country, and officials say at least two people were killed by the natural disaster.

New Zealand's South Island was hit by the 7.8-magnitude earthquake at 12:02 a.m. local time Monday (6:02 a.m. Sunday EST), the U.S. Geological Survery (USGS) said. The quake's epicenter was northeast of Christchurch, but it was felt as far away as New Zealand's capital of Wellington, located 120 miles (200 km) away, on the North Island, the BBC reports.

Tsunami waves over 7 feet tall (2 meters) hit the coast about 2 hours after the main earthquake, WeatherWatch said. Although authorities have now lifted the tsunami alert, the BBC reports that officials are still asking residents to stay away from the shore. Following the initial earthquake and subsequent tsunami, the island nation has experienced hundreds of aftershock temblors, including a 6.3-magnitude quake, according tothe BBC. [Image Gallery: This Millennium's Destructive Earthquakes]

The town nearest to the earthquake epicenter, Kaikoura, has been cut off after the quake triggered landslides and a large river dammed up, the BBC reports. More than 1,000 people are still stranded in the town, and military helicopters and a navy ship are being sent to evacuate the remaining residents.

In 2011, New Zealand experienced a devastating magnitude-6.3 quake, also centered very close to Christchurch. The earthquake killed 185 people and damaged or destroyed 100,000 buildings, and was the costliest disaster ever to strike New Zealand, according to New Zealand government officials.

The lethal 2011 earthquake was the aftershock of a magnitude-7.1 temblor that struck 172 days earlier (in 2010), according to the USGS. This initial quake caused millions of dollars in damage to bridges and buildings, and seriously injured two people. Though stronger than the aftershock, the 2010 temblor occurred farther away from any city, the USGS said.