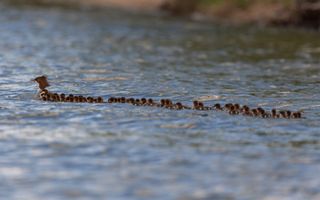 One momma bird, 76 ducklings. Experts agree: That is one duckload of beaks to feed.

Your eyes do not deceive you. There is no Photoshop or fowl play behind this awesomely adorable picture. In late June, nature photographer Brent Cizek snapped this shot at Lake Bemidji in northeastern Minnesota. He was paddling around in a tiny plastic boat when he saw the remarkable procession: a single mother duck trailed by what looked like a small army of tiny ducklings.

At home, Cizek counted at least 50 ducklings in the photo featured above. But on subsequent visits to the lake, he saw as many as 76 little quackers paddling behind their matriarch.

On Twitter, Cizek billed the mother duck as Mama Merganser, nodding to the duck's species. (Mama and her brood are all common mergansers, or Mergus merganser.) But the question remained: How does one duck come to care for nearly 80 ducklings?

While it's not unusual to see 20 or 30 ducklings following a single mom, a group of 50 or more is really remarkable, Audubon magazine field editor Kenn Kaufman told Audobon.org. There are probably a few different avian quirks at play here.

For starters, Mama Merganser almost certainly did not hatch all those ducklings herself. That would be impossible, ornithologist Richard Prum told The New York Times. Female ducks can usually lay only about a dozen eggs at once and can incubate up to 20. (Try to imagine one duck sitting on 80 eggs, and you'll see why this could be tricky.)

How a mother duck might come to incubate more eggs than she actually laid is a quirk of the quacking race. You see, Kaufman said, female ducks have an interesting habit of leaving a few of their eggs in other mothers' nests. It's not totally clear why a mother duck would do this, but it's probably a way to ensure that at least some of her offspring have a chance to hatch even if something tragic should happen to her or her nest.

In other words, it may be a way of "not putting all [her] eggs in one basket," Kaufman said.

So, a mixture of Mama's actual kids plus some unplanned egg adoption might account for 20 or so of the ducklings trailing her around Lake Bemidji, but what about the other 56?  They may be enrollees in a sort of duckling day-care system called a crèche, David Rave, an area wildlife manager who oversees the Bemidji region for the Minnesota Department of Natural Resources, told the Times.

In a crèche, female birds entrust their newborn young into the care of an older, wiser female — sort of like a great-grandmother, Rave said. This elder babysitter is usually experienced in raising young and doesn't mind taking a few hatchlings under her wing while the little tykes' parents go off to do important adult bird things, like molt their feathers.

Several species of birds, including common mergansers, use this system, Rave said. "I've seen crèches [of] up to 35 and 50 often, but 70 — that would be a very big crèche," Rave told the Times.

To conclude, the mystery of Mama Merganser's gargantuan brood remains a tough nut to quack. But before we go doling out any Duck Mother of the Year awards, it's probably wise to wait and see how well these 76 little munchkins grow up. Remember: Not all adult ducks have well-adjusted love lives.