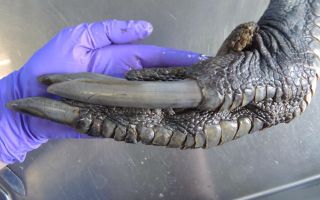 Cassowaries' powerful feet have sturdy claws that can be deadly weapons.
(Image: © Courtesy of Sarah Davis)

A photo showing an enormous, scaly foot that dwarfed the photographer's hand recently captivated Twitter. With muscular digits tipped by powerful claws, the appendage resembles a dinosaur's foot — and that's exactly what it is.

The foot's owner was an imposing (though deceased) flightless bird called a southern cassowary (Casuarius casuarius johnsonii). Cassowaries, along with all other modern birds, are living dinosaurs, descendants of the only dinosaur lineage to survive the Cretaceous mass extinction about 66 million years ago.

Paleontologist Sarah Davis, a doctoral candidate at the University of Texas at Austin, tweeted the image on Jan. 15 to highlight the similarities between birds and their extinct dinosaur cousins, adding hashtags that included #birdsaredinosaurs. [Exquisite Corpses: Biologists Share #BestCarcass Photos]

Davis studies avian and nonavian dinosaurs, and analyzing modern birds provides valuable insights into the anatomy of extinct dinosaurs, she told Live Science in an email.

In a second tweet, Davis explained that the bird had died of natural causes "after a long and healthy life." She took the photo during a dissection at the university's Vertebrate Paleontology Lab, under the direction of lab manager Kenneth Bader, Davis said.

For this project, Davis and other students were dissecting the cassowary to compare its anatomy with the anatomy of other flightless terrestrial birds, "particularly ostriches and emus," described in published studies, she said.

"In this case, we are only looking at closely related species and looking for subtle differences in their legs," Davis said. Cassowaries, ostriches and emus are all flightless, but their lineages lost the ability to fly independently of each other. Clues to those divergent evolutionary pathways might be retained in subtle variations in their leg muscles.

"Those differences are what we are looking for," she said.

It's no wonder that even non-scientists were intrigued by the sight of the imposing cassowary foot in Davis' photo. Few birds convey a "don't mess with me" vibe as effectively as a cassowary does; adults can grow to be nearly 7 feet (2 meters) tall, and females weigh up to 168 lbs. (76 kilograms), while the slightly smaller males can weigh as much as 121 lbs. (55 kg). Their heads and necks are feathered in brilliant colors, and their heavily muscled legs and feet can deliver powerful kicks.

"Cassowaries won't hesitate to kick at animals — and people — if they think they're threatening them, and the claw is a very effective tool for self-defense," Davis said.

The exceptional size and heft of the foot also invoked "a very dinosaurian feeling" — a perspective that Davis wanted to share, she added. With her tweet, Davis hoped to awaken curiosity in people about the relationship between dinosaurs and birds, she said in the email.

"Birds are living dinosaurs, and the dinosaurs we see today are equally as interesting as those that went extinct at the end of the Cretaceous," Davis said.