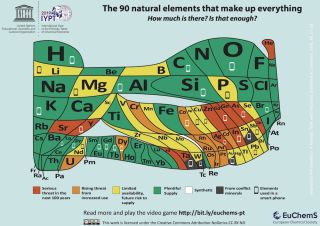 A new periodic table sizes the boxes for each element based on their relative abundance. Oxygen is plentiful, but indium and helium may soon be scarce, thanks to humans' voracious appetite for smartphones and party balloons.
(Image: © EuChemS/CC BY-ND)

Oxygen can breathe easy, but the party might soon be over for helium balloons.

Those are two takeaways from a brand-new model of the periodic table of elements, debuted this week by the European Chemical Society (or EuChemS, a group representing more than 160,000 chemists in the European Union). Unlike the ubiquitous classroom version of the table, which categorizes the universe's 118 known natural and synthetic elements with equal space for each element, EuChemS' chart has been warped and wobbled to show the relative abundance or scarcity of 90 naturally occurring elements here on Earth. [Elementary, My Dear: 8 Little-Known Elements]

The bubbly new chart of life's building blocks is more than a cool curiosity; according to EuChemS president David Cole-Hamilton, it's also an important reminder of which of Earth's elements are in danger of disappearing, thanks to human overuse.

"Some of these elements, we have less than a hundred years before it's much more difficult to get hold of them," Cole-Hamilton told the Marketplace "Morning Report" radio show. Others, he noted, may only have a shelf life of a few decades.

According to the new table, oxygen — which makes up about 21 percent of Earth's atmosphere and is (knock on wood) allowing you to breathe right now — is the planet's most abundant element and faces no threat of extinction.

Many of the most-threatened elements, meanwhile, are being used to manufacture tech-heavy devices like computers and smartphones. Indium, for example, is a silvery metal used to create touch screens for phones and computers. According to Cole-Hamilton, the world's indium supply is "extremely thinly spread" across the planet and could soon dry up if we continue chucking out our old devices every few years.

"In the U.K. alone, 1 million smartphones are exchanged every month," Cole-Hamilton told Marketplace. "If we use [indium] at the rate we continue to use it, the amount in the reserves is only enough for another 20 years."

Humans' appetite for shiny new tech is not the only threat to the elements, though. Helium, the second-most abundant element in the universe, may only have a few decades left of use on Earth, thanks largely to runaway party balloons.

While the helium used in MRI scanners and deep-sea diving is usually recycled, Cole-Hamilton said, helium party balloons tend to release their gassy cargo directly into the atmosphere, where it is soon lost to space.

"If helium gets into the atmosphere, it can go right up to the edge of the Earth and be lost in outer space forever," Cole-Hamilton said. "Really, we shouldn't be putting helium into party balloons."

Cole-Hamilton added that there's only about 10 years' worth of helium left in Earth's reserves, if humans don't start changing their balloon-releasing behavior soon.

2019 marks the 150th anniversary of the periodic table, which was originally conceived by Russian chemist Dmitri Mendeleev in 1869. Last week, the world's oldest known classroom version of the periodic table was discovered in a cluttered storeroom in Scotland. The chart dates to 1885.