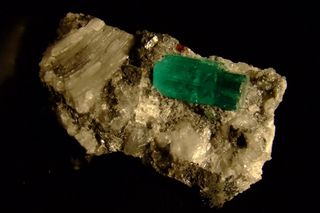 An emerald crystal found in Muzo, Colombia. Emerald crystals are one form of the element beryllium.
(Image: © Creative Commons | M.M.)

Unless you're a real science geek, chances are you never knew these eight elements even existed. Nonetheless, many of them form the foundations of modern life.

Here's a sample of the elements you'd rather not live without.

Next time you're traveling through Europe, take note of some euro paper banknotes. They contain tiny amounts of europium, a hard, silvery metal, as an anti-counterfeiting measure. [Elementary, My Dear: 8 Elements You Never Heard Of]

There are a handful of places in the world where europium-containing ore is mined, but deposits of the rare element europium (atomic number 63) are in short supply. Few people cared until the invention of the television.

Early color television programs were barely colored: The blues were muted, yellows appeared somewhat bleached out and whites were dingy and grayish. The reason? Nobody could find a way to reproduce a strong, rich red color, so the other colors were toned down to maintain some balance.

Then, once it was discovered that europium reproduced a robust red in television (And later, computer) screens, the scramble for europium supplies was on. Mines in China, Russia and a small mine in California supply most of the world's europium.

First discovered in 1879, scandium (atomic number 21) was named for Scandinavia by chemist Lars Fredrik Nilson. Though it's fairly common in the Earth's crust, nobody had any real use for this silvery metal until about 100 years after its discovery.

But in the 1970s, metallurgists found that aluminum-scandium alloys are strong and lightweight, making it useful in aerospace components. It wasn't long before sporting-equipment manufacturers started using the alloys in everything from baseball bats to lacrosse sticks.

In Isaac Asimov's sci-fi story "Sucker Bait," scientists struggle to understand why all the colonists of the planet known as Junior died after settling on its surface. Finally, one mutinous renegade realizes that high levels of beryllium in the soil caused the colonists to slowly die of berylliosis.

The dangers of beryllium aren't just the stuff of fiction, however: The element (atomic number 4) is recognized as a carcinogen by the International Agency for Research on Cancer.In another form, however, beryllium is highly desirable, even priceless. When combined with trace amounts of chromium, beryllium takes on a beautiful green hue as the gemstone commonly known as the emerald.

Few elements are weirder than gallium: A relatively soft, glittering metal, it's widely used today in semiconductors and other electronics, as well as in the pharmaceutical industry.

But in years past, gallium (atomic number 31) was a key part of a favorite parlor trick for magicians because it melts when it's just slightly warmer than room temperature. Thus, spoons that are made of gallium look normal, but when dipped into a cup of hot tea will instantly dissolve. Even holding a gallium spoon in your hand too long will create a drippy, metallic mess.

Tellurium (atomic number 52) is considered by most experts to be mildly toxic, though it's unusual to find someone who has suffered serious harm from it. How to tell if someone has been exposed to high levels of tellurium? As their body metabolizes telluride, their breath will have a pungent, garlic-like odor — as befits an element first found in Dracula's legendary homeland.

"Hoarding gold is for libertarians. Bitcoin mining is for nerds," wrote Jonathon Keats in Wired. "Really adventurous investors — especially fans of the stranger stretches of the periodic table — ought to consider stockpiling something more intense, like industrially valuable exotic elements."

High on the list of rare, valuable elements is dysprosium (atomic number 66), which is named after the ancient Greek dysprositos, meaning "hard to get," appropriately enough. The soft, metallic substance is in big demand for electric motors, especially those in electric vehicles and wind turbines, which has earned dysprosium a place on the U.S. Department of Energy's list of critical materials for the green economy.