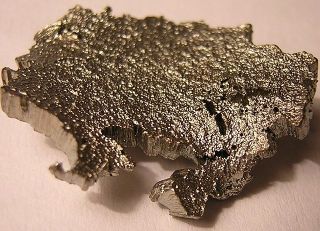 Scandium is a silvery metal that is soft and has a density of about three times that of water. Scandium is a transition metal and is also considered a rare earth element due to similar chemical properties (such as difficulty in extracting and in separating from other elements) and existence in the same ores, according to Chemicool.

Scandium is the 31st most abundant element on Earth, according to Periodic Table, with about 22 parts per million abundance by weight in Earth's crust, according to Chemicool.

Russian chemist Dmitri Mendeleev, inventor of the periodic table, predicted the existence and properties of scandium (which he called "ekaboron" — similar to boron) in 1869, according to the New World Encyclopedia. Lars Fredrick Nilson, a Swedish chemist, when examining the spectra of the minerals euxenite and gadolinite, discovered the element in 1879. The element was named for the Latin word for Scandinavia, "Scandia," due to the minerals in which scandium was at that time found to exist only in the Scandinavian Peninsula, according to Peter van der Krogt, a Dutch historian. Per Teodor Cleve, a Swedish chemist, made the link that the new element discovered by Nilson was the same as the proposed element described by Mendeleev.

In the first attempt to isolate scandium, Nilson and his team processed 10 kilograms of euxenite and were able to produce about two grams of scandium oxide. According to the New World Encyclopedia, metallic scandium wasn't produced for the first time until 1937 by Werner Fischer, Karl Brünger, and Hans Grienseisen, German chemists. In 1960, 99 percent pure scandium was produced.

The majority of research involving scandium is the use of scandium alloys, particularly with aluminum. Most of these studies discuss the benefits of combining scandium with other metals and what alloys will possibly be used for. There are new methods in working with the alloys, such as a patent filed in 1997 by William Tack, an American inventor, and continuing studies on recovering scandium from various resources, such as this study by Weiwei Wang et al., a group of Australian researchers, published in 2010 in Elsevier in the Hydrometallurgy section.

Tack's patent described a method for using aluminum-scandium alloys to assemble structures such as bicycle frames by use of welding. The alloys that were used contained various amounts of scandium along with other "fillers" including silicon, manganese, magnesium, zirconium, titanium, and copper to determine the best combination of materials for various structures using the author's welding technique.

The 2010 study described several processes for the recovery of scandium from several resources. Scandium is primarily recovered as a by-product of mining other ores such as uranium, aluminum, titanium, zirconium, and other rare-earth ores. Various techniques are used to recover the scandium in the left over ores including leaching, solvent extraction, precipitation, and calcination.

A dissertation study published in 2016 by Claire Parker, an ocean sciences student in California, discusses the importance of scandium in the ocean. Trace metals are essential micronutrients in the health of the ocean environment, and while iron is the most studied, scandium has been one of the least studied trace elements that are found in the ocean. There are no known biological roles for scandium. Therefore, according to the author, the scandium dissolved in the ocean could relate to the non-nutrient side of the oceanic iron cycle.

Based on several studies and discussed in the dissertation, dissolved scandium and iron in the ocean have similar distributions, concentrations and reactivity (based on a similar inorganic compound). The author concludes that studying both iron and scandium and their properties within the ocean can provide "new insights into physical, chemical, and biological processes occurring in the ocean."