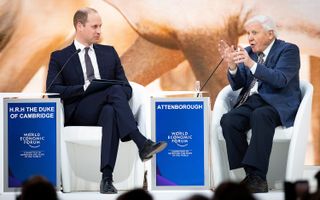 Speaking to the World Economic Forum in Davos on Tuesday (Jan. 22), Attenborough said that during his lifetime, humans have changed the climate so much that we are no longer in the Holocene epoch — "the 12,000-year period of climatic stability that allowed humans to settle, farm and create civilizations" — but are now in the "Anthropocene," the "Age of Humans."

"I am quite literally from another age," said Attenborough, The Washington Post reported. At 92, he was born prior to a frequently proposed cutoff for the start of the Anthropocene, which is generally set around 1950.

But is Attenborough really from "another age"?

The idea that we've officially entered a new geological epoch is controversial.

A geological epoch must be marked by something in the geologic record that future scientists could point to as a transition or unique feature of the era. The International Commission of Stratigraphy makes the call as to whether a geological unit qualifies for the official geologic time scale. The Anthropocene hasn't officially made the cut yet, but an Anthropocene Working Group has been formed to consider a formal definition.

The arguments for the Anthropocene are many, but the boundaries are still fuzzy. According to the Anthropocene Working Group, the start of the new epoch might be considered to be the beginning of the Industrial Revolution, when humans began pumping fossil-fuel emissions into the atmosphere and warming the climate. That would put the date at around 1800, well before Attenborough's birth.

A popular alternative suggestion is one that Attenborough referenced in Switzerland. Setting the Anthropocene in the 1950s would peg its beginning to an unmistakable global record that exists in the form of radioactive isotopes left over from nuclear testing.

Other recent, indelible marks of human activity might include millions of miles of holes and tunnels from mining and oil drilling, scientists have suggested. Future geologists may notice layers of "plastiglomerate," a new kind of rock formed from melted plastic and organic debris. The fossil record might even mark us by what we eat: Since the 1950s, chickens have become huge and weird.

Attenborough's remarks weren't meant as an academic debate about epochs, however. In his speech, he exhorted global influencers to take action to save the planet.

"We are destroying the natural world," he said, "and with it, ourselves."