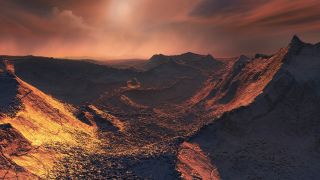 There's a chance that the dimly lit super-Earth called Barnard b, which orbits Barnard's star, could support life. Here, an artist's impression of the planet's frozen surface.
(Image: © ESO/M. Kornmesser)

There's a rocky planet out there that's very big and cold. Its sun, a red dwarf named "Barnard's star" looks much larger in its sky than Earth's. It bathes the planet in X-rays and ultraviolet light, likely enough radiation to strip away any atmosphere. But Barnard's star is also much dimmer than Earth's host star, so the planet's surface is probably a frozen wasteland — the sort of place that likely wouldn't have any liquid water, and that most scientists wouldn't expect to support life.

But a new analysis suggests that the planet, named Barnard B, might give rise to life after all.

In a presentation on Jan. 10 at the 233rd meeting of the American Astronomical Society in Seattle, Washington, a pair of Villanova astronomers argued that if Barnard B had enough geothermal activity, it might have pockets of heat on its surface where life might survive.

Barnard B is still too small and far away for our current generation of telescopes to image directly. Instead, scientists know it's there and they know its general characteristics — a rocky planet more than three times the mass of Earth about as close to its star as Mercury is to ours — from studying the way it makes light coming from Barnard's star wiggle. [Gallery: Unique Life at Antarctic Deep-Sea Vents]

Still astronomers don't know whether it has an ice-covered surface. And because there are no super-Earths in our solar system, they don't know if planets like that tend to have nickel-iron cores that would support magnetic fields and geothermal activity.

But if the planet is covered in ice and does have an active nickel-iron core, they wrote, heat might vent up to the surface and create under-ice pockets of liquid water where basic forms of life might thrive. The situation, they said, might be similar to that found in some parts of Antarctica, and that scientists suspect might exist under the hard outer shell of Europa, the smallest of Jupiter's moons.

For now, researchers have no way to test any of these guesses about the planet. It is close enough to Earth, though, that in the future, very large telescopes might be able to take pictures of its surface, the scientists said.

Perhaps one day, humanity will even send a probe there, like those proposed for Proxima b, a planet in the only star system that's even closer to Earth. In the meantime though, Barnard b will remain a tantalizing mystery right in our stellar neighborhood.