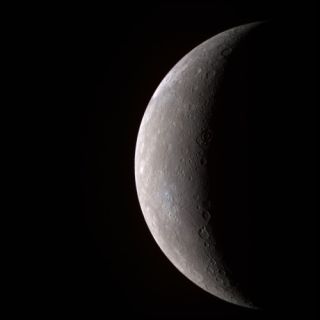 Each Friday this summer, Life's Little Mysteries, a sister site to LiveScience, presents The Greatest Mysteries of the Cosmos, starting with our solar system.

Mercury, by virtue of being the closest planet to the sun, has been notoriously difficult to study over the centuries. Telescopes have to contend with the sun's glare, while space probes — pulled along by the sun's gravity — must burn a lot of fuel to slow down for more than just a fleeting zoom past the small planet.

In fact, only two spacecraft have ever successfully visited Mercury: NASA's Mariner 10, back in the mid-70's, and now Messenger (MErcury Surface, Space ENvironment, GEochemistry, and Ranging) which, after three flybys since 2008, finally settled into orbit around Mercury just this March. The Messenger mission should help answer many of the vexing Mercurial mysteries, including these following puzzlers.

Mercury is the second-densest planet in the solar system, just a smidge less than Earth. Scientists think Mercury must have a giant core that makes up two-thirds of its mass; on Earth, the core comprises just one-third. Collisions between rocky bodies early in the solar system's history most likely knocked off some of Mercury's less-dense outer layers, leaving just the heavy stuff behind, said Sean Solomon, director of the department of terrestrial magnetism at the Carnegie Institution of Washington, and principal investigator for the Messenger mission. Chemical analyses by Messenger of Mercury's surface — which will be released soon — should put this impactor theory to the test.

Besides Earth, Mercury is the only other rocky inner solar system planet to have a significant magnetic field (though only about 1 percent the strength of Earth's). The existence of a magnetic field is not just a planetary trivia question — ours shields organisms from damaging radiation from the sun and outside the solar system. Solomon describes the Earth's magnetic field as "our umbrella against incoming radiation," and without such a field, it would be very difficult for life to develop or persist.

Researchers believe Mercury's magnetic field is generated by the same "dynamo" process as the Earth's, driven by the roiling of electrically conductive, liquid metal in the planet's outer core. Messenger will map the geometry of the field in detail, Solomon told Life's Little Mysteries, which should help scientists pin down its origin.

Sun-blasted Mercury is hardly the place one might think to look for ice. But some craters at Mercury's poles appear to be in a permanent shadow, and the mercury (pun intended) on these crater floors could plunge to minus 280 degrees Fahrenheit. These "deep-freeze traps," as Solomon called them, could hold much more ice than deposits found on the moon.  While that's still not a lot of agua, it still goes to show that in the solar system "water is everywhere, at least as a molecule," Solomon said.

Though it's the smallest planet and therefore has little gravity, Mercury somehow has an atmosphere, albeit a very tenuous one. Even stranger is the fact that Mercury is losing this atmosphere, the gases of which contribute to the comet-like tail that trails the planet. "Somehow on Mercury, the atmosphere has to be constantly regenerated," Solomon said. Scientists think captured material from the "solar wind" — the stream of particles radiating out from the sun — contributes, as well as dust kicked up by micrometeorite impacts.

Mercury already has the most eccentric (which in astronomical terms means oval-shaped) orbit of all of the planets in our solar system. Recent computer simulations showed that, over the course of a few billion years, this orbit could become even more eccentric and Mercury stands about a 1 percent chance of colliding with Venus or the sun. More disturbingly, in tandem with the outer giant planet's gravity, Mercury's chaotic orbit could disrupt the orbits of the inner planets such that Mercury, Venus or Mars smashes into the Earth — a cataclysm of truly doomsday-esque proportions.