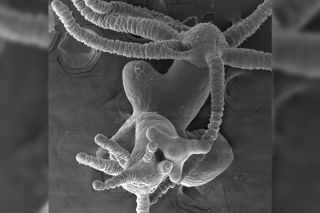 The tiny, immortal hydra is a freshwater animal that can regenerate an entirely new animal from just the tiniest sliver of its body. Usually, it does this perfectly: One foot, one long skinny body, and one tentacled head.

But with a single genetic tweak, researchers can create monstrous hydras that sprout fully functional heads all over their bodies — appropriate for an animal named for an ancient Greek monster that had somewhere between six and nine heads.

These many-headed hydras aren't just a trick of mad science. For the first time, researchers have figured out what keeps hydra head regeneration in check. The findings could inform everything from human developmental studies to cancer research. [The 12 Weirdest Animal Discoveries]

The hunt for an off switch

Though hydras are simple animals, regrowing body parts is no minor achievement. With each regeneration, the animal has to organize its body plan so that just one head ends up on top, and just one foot, or basal disc, sprouts on the bottom. Researchers had some of the pieces of this puzzle. They knew the gene Wnt3 is crucial for prompting the growth of the head. They also knew there must be some molecular check on Wnt3. Without that inhibition, the hydra would just grow heads all over. They also knew that a particular receptor and genetic activator, called beta-catenin/TCF, were activated by Wnt3 to start the head-growth process.

But they were missing the "off" switch. Something, they knew, had to prevent the hydra from growing head after head after head, said Brigitte Galliot, a professor of genetics and evolution at the University of Geneva.

So Galliot and her colleagues went hunting. They started with a close relative of hydras, planarians, or flatworms, which also regenerate. In the planarian genome, they found 440 genes that become less active when beta-catenin/TCF signals were blocked, giving them a starting point for the search for other genes involved in this cycle. Of those, 124 also existed in the hydra genome. [In Photos: Worm Grows Heads and Brains of Other Species]

Of those, they found only five genes that are most active at the top of the hydra's tubular body and least active at its foot, meaning they had to be specific to head growth. Among those five, they looked for genes that became increasingly active during regeneration. That left three: Wnt3, Wnt5 and a gene called Sp5.

The team already knew that Wnt3 and Wnt5 got the head-growing process rolling. So they focused on Sp5. They soon found that beta-catenin/TCF prompts the activity of Sp5 — but Sp5 also tamps down the beta-catenin/TCF signals by repressing Wnt3.

This might sound a little strange, but it was just what the researchers were looking for: a compound that could put the brakes on an otherwise runaway feedback loop. To check their work, they grew hydras engineered not to express the Sp5 gene.

"In 100 [percent] of these animals you get ectopic [extra] heads," Galliot told Live Science. "Which is really amazing."

What happens, Galliot and her colleagues reported today (Jan. 19) in the journal Nature Communications, is that when a hydra needs a new head, it releases Wnt3, which clings to beta-catenin/TCF, which activates a whole bunch of genes, including more Wnt3 and Sp5. Without Sp5, the Wnt3 keeps the cycle going, and tons of heads pop up all over the regenerating hydra. These heads, Galliot said, are totally functional. They have a nervous system and tentacles and a working mouth.

When Sp5 is in the picture, as it is in nature, it binds to Wnt3, keeping that activator from finding and binding to beta-catenin/TCF. In the absence of Wnt3, beta-catenin/TCF stops sending out "make a head!" messages, and only one head grows.

The process, Galliot said, is all about the balance between activation and repression. And that's where things get interesting. It turns out that Wnt3 isn't just in flatworms and hydras and other simple, regenerating animals. It's also in mammals, including humans. The gene appears to affect embryonic development, which means that understanding its function could help scientists understand what controls early human development. Wnt3 is also a crucial driver of some sorts of cancer, Galliot said. It might be that Sp5 manipulation could halt the proliferation of such cancers, she said.

That kind of medical research is still far in the future, but the hydra's tentacle-studded heads point the way, Galliot said.

"What we learn from simple organisms like this tell us what kind of test we can do in mammals to understand better," she said. "It gives us a direction."