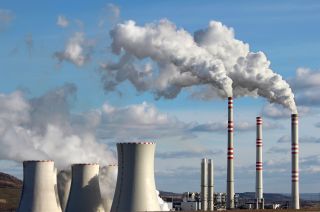 How can humans limit catastrophic climate change? We can phase out fossil-fuel emitters — such as coal-burning power plants, jet-fuel-slurping planes and gas-thirsty automobiles — once they reach their retirement age, a new study finds.

And we need to start doing that now, the researchers said.

If society actually did that, we'd have a 64 percent chance of limiting the average global temperature rise to 2.7 degrees Fahrenheit (1.5 degrees Celsius) above preindustrial levels, said study lead researcher Christopher Smith, a postdoctoral researcher at the Institute for Climate and Atmospheric Science at the University of Leeds, in England. [6 Unexpected Effects of Climate Change]

"We could ramp down all of the fossil-fuel-emitting infrastructure that we have, all of the way until it reaches the end of its life," Smith told Live Science. "And then we'd replace it with something [that emits] zero carbon."

However, this plan — while scientifically sound — is likely a pie-in-the-sky idea that won't happen anytime soon, said Donald Wuebbles, a professor of atmospheric sciences at the University of Illinois at Urbana-Champaign who wasn't involved with the research.

"It's just not going to happen," Wuebbles told Live Science. "It's so much cheaper to rehabilitate existing facilities than it is to totally close everything off."

On the upside, weaning ourselves off of fossil fuels will likely happen at some point, just not tomorrow, Wuebbles said. Generally, it takes about 40 to 50 years for society to change its major power sources, for instance from coal to nuclear power plants. "I think this one [from fossil fuels to renewable energy] is going to occur occur somewhat more rapidly, but it's still going to be hard," Wuebbles said.

Smith's team chose the 2.7 degree F (1.5 degree C) benchmark because that's a temperature increase that could unleash extreme flooding on small island states, he said. "The difference in the sea level rise of the rate of warming between 1.5 and 2 degrees [celsius] would literally be life or death for them," Smith said.

And because climate change doesn't follow a linear trajectory (instead, it becomes much worse at high levels of warming), an increase of 3.6 degrees F (2 degrees C) could be catastrophic, Smith noted. That said, "it is probably better to aim for [1.5 degrees C] and miss it slightly than it is for us to say 2 degrees is fine," Smith said. "Because 1.6 [degrees C] is still a lot better than 2. I would definitely say we should have ambition and every fraction of a degree warming we can avoid is a good thing."

So, he and his colleagues got to work to see whether humans could stick to the 2.7 degree F (1.5 degrees C) benchmark if societies the world over phased out sources of fossil fuels and then replaced them with zero-carbon alternatives. It was possible, they found; if the plan was followed, carbon-dioxide emissions would become near zero after just 40 years. [The Reality of Climate Change: 10 Myths Busted]

"If we don't build any new fossil fuel infrastructure, there is a good chance we'll avoid the worst impacts of climate change," Smith said. There is hope on the horizon, too, he added. Even if some federal governments aren't taking action, some state governments and companies are. For instance, in December 2018, the shipping giant Maersk pledged to become carbon neutral by 2050.

But humans have to act quickly, Smith noted. If governments and private industries wait until 2030 to start phasing out fossil-fuel emitters, there will only be a 50 percent chance that the world will be able to keep the average temperature increase to 2.7 degrees F, even if the rate of fossil-fuel retirement is accelerated, the researchers found.

Meanwhile, the transition will likely happen, but a lot more slowly than the study plan calls for, Wuebbles said. "The bottom line is, I agree with the concept of the paper, it's an interesting piece of work, he said. "I just don't see the political systems responding, unfortunately."

The study also has two major caveats. First, it does not "assess the practical feasibility of this transition," but rather focuses on the numbers, the researchers wrote in the study. That's a tall order, as phasing out fossil-fuel emitters will be an expensive and time-consuming mission, especially in industries that don't have good green energy alternatives yet, such as aviation.

In addition, the study doesn't consider hard-to-predict climate-change contributors, such as permafrost melt or forest dieback, which were not included in their model, Smith said. But even if these events occur, limiting human-made greenhouse gases is still worthwhile, Smith said.

The study was published online today (Jan. 15) in the journal Nature Communications.