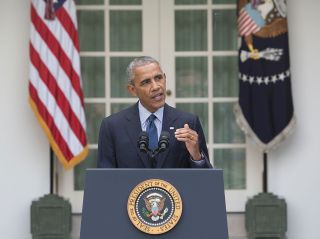 Beliefs about the reality of human-caused climate change show a split between liberals and conservatives. Here, President Obama talks about the Paris climate agreement on Oct. 5, 2016, at the White House in Washington, D.C.
(Image: © Chris Kleponis-Pool/Getty Images)

Barely over a quarter of Americans know that almost all climate scientists agree that climate change is happening and that humans are to blame, a new Pew Research Center survey finds.

The survey also reveals a strong split between political liberals and political conservatives on the issue. While 55 percent of liberal Democrats say climate scientists are trustworthy, only 15 percent of conservative Republicans say the same.

The findings are in line with the results of other surveys of the politics of climate change, said Anthony Leiserowitz, director of the Yale Program on Climate Change Communication. Leiserowitz was not involved in the Pew study, but he and his colleagues conduct their own surveys on climate attitudes. [The Reality of Climate Change: 10 Myths Busted]

"The overwhelming finding that they see here is that there's a strong partisan divide on climate change, and that is a pattern we first saw emerge in 1997," Leiserowitz told Live Science.

The partisan gap isn't necessarily set in stone, however, Leiserowitz said. It's actually been narrowing recently — but it remains to be seen how the result of this year's presidential election may affect the divide. [The Reality of Climate Change: 10 Myths Busted]

Prior to 1997, the two major parties held similar beliefs on the occurrence of human-caused climate change, Leiserowitz said. Right around that time, then-President Bill Clinton and then-Vice President Al Gore took on the issue and pushed for the Kyoto Protocol, an international climate treaty meant to reduce greenhouse gas emissions.

"That's the moment when they come back and say, 'This is a global problem, and the U.S. needs to be part of the solution,' that the two parties begin to diverge," Leiserowitz said.

Since then, the American public's belief that climate change is real has fluctuated. Belief that climate change exists and that it's human-caused began to rise around 2004 and hit a peak around 2007, driven by media coverage of California's climate initiatives under Republican Gov. Arnold Schwarzenegger and the Hollywood film "The Day After Tomorrow," released in 2004. (Really: Leiserowitz's research found that Americans who saw the blockbuster were moved to think climate change is a problem. Al Gore's film "An Inconvenient Truth" was released in 2006 but was seen by far fewer people, Leiserowitz said.)

These numbers waned during the 2008 recession, when the media abruptly stopped talking about climate change and the conservative tea-party wing of the Republican Party gained more power, Leiserowitz said. Belief in man-made climate change bottomed out in 2010 and 2011 but has been creeping upward since then, he said. [6 Unexpected Effects of Climate Change]

"That uptick is not coming from Democrats," he said. "Democrats have not really changed much at all. Independents — their belief that global warming is happening — has increased. But the real shift is happening among Republicans, and most interesting, the biggest shift — 19 percentage points — is among conservative Republicans."

Still, up until last spring, the trends were "moving in a more science-aligned direction," Leiserowitz said. Even members of the Republican establishment had been willing to discuss climate change as a problem, Leiserowitz said, citing former presidential candidate John McCain, who had sponsored and supported climate legislation in the U.S. Senate.

"Then, along comes Donald Trump, and he basically flips over all the card tables," Leiserowitz said. The candidate has called climate change a hoax on multiple occasions and once tweeted that "the concept of global warming was created by and for the Chinese in order to make U.S. manufacturing non-competitive." Trump has also been consistent in calling for less regulation of fossil fuel emissions. [Election Day 2016: A Guide to the When, Why, What and How]

However, Americans' views aren't quite as extreme as the political class would make it seem, Leiserowitz said. Yale's surveys found that about 17 percent of Americans are alarmed about climate change, and 10 percent are entirely dismissive. The other 63 percent believe in, and are worried about, climate change to differing degrees.

"Most Americans are actually in the middle, and more of those people in the middle are leaning pretty well toward the scientific consensus," Leiserowitz said.