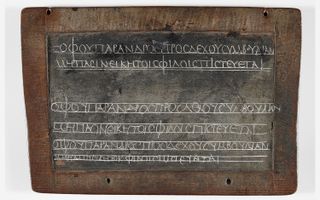 A schoolchild's homework in Greek was written on a wax tablet nearly 2,000 years ago.
(Image: © Copyright British Library Board)

Homework written by a school kid in ancient Egypt has been preserved since the second century A.D. And the words on the slab may sound familiar to any kid whose parents worry about them falling in with a bad crowd.

An ancient lesson preserved on a wood-mounted wax slab about the size of a Kindle reads: "You should accept advice from a wise man only" and "You cannot trust all your friends."

Acquired by the British Library in 1892, the tablet hasn't been publicly displayed since the 1970s. The homework slab will be featured in an upcoming British Library exhibit called "Writing: Making Your Mark," which traces the evolution of writing over 5,000 years of human history, library representatives said in a statement. [In Photos: Ancient Egyptian School Discovered]

On the wax tablet is a two-part lesson in Greek that provides a snapshot of daily life for a pupil attending primary school in Egypt about 1,800 years ago, exhibit co-curator Peter Toth, also a curator of ancient and medieval manuscripts at the British Library, told Live Science in an email.

One part of the assignment was a writing exercise. The slab displays a teacher's written example in the first line, and the next two lines contain the same words copied "rather clumsily" in the student's hand, much as primary students today copy lines penned by their teachers, Toth said. The rest of the homework included a multiplication table and reading exercises.

Though the name and sex of the tablet's owner is unknown, the child was likely a boy from a wealthy family, as formal education in ancient Egypt was typically reserved for males of privilege, according to the Royal Ontario Museum.

Lines copied by this long-ago student were not just for practicing penmanship; they were also intended to impart moral lessons. "It's not only the hands and fingers but also the mind that is being instructed here," Toth said.

(As of yet, no ancient Egyptian homework has been discovered with the lines: "If your friends jumped into the Nile, would you do it too?" but it wouldn't be surprising.)

Homework slabs like this one were made by pouring melted, blackened wax into a rectangular depression at the center of a wooden tablet. Once the wax cooled, teachers and students could use a metal stylus to scratch letters that appeared as a lighter color against the dark background.

Wax typically breaks down in the presence of moisture, so the region's dry climate likely helped to protect the tablet, "preserving the clumsy handwriting of a primary school pupil from almost two millennia ago," Toth said.

Along with the homework slab, the exhibition brings together over 100 artifacts from the British Library collections to explore examples of writing from ancient civilizations to modern cultures. Objects include stone monuments bearing Egyptian hieroglyphs; a copy of the literary classic "Ulysses" annotated by author James Joyce; musical notes penned by Mozart; and contemporary tattooing instruments.