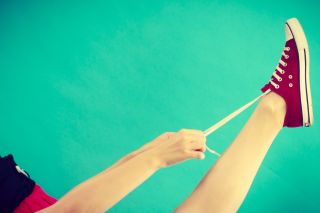 Shoes on or off ... that is the question.
(Image: © Shutterstock)

Are you one of those hosts who's immediately gripped by this conundrum as your guests step across the threshold into your home: Should you, or shouldn't you, ask them to remove their shoes?

On the one hand, it makes you look like a fussy host. On the other, what about the legions of disease-causing bacteria that will gleefully leap off their shoes and inevitably infest your home?

Avoiding bacterial invasion at the risk of a little social awkwardness seems like a no-brainer. But are shoe bacteria something we should really be worried about in our homes? Here's what science tells us about how to navigate this conundrum. [Could Humans Live Without Bacteria?]

To start with, there's no point in sugarcoating the pill: the average shoe harbors "hundreds of thousands of bacteria per square inch," according to Jonathan Sexton, an environmental microbiologist and research specialist at the University of Arizona. The soles of our shoes are essentially a meet and greet for these microbes, and with each step we take, we pick up new attendants. "Pretty much wherever you go, you're going to be picking up stuff," Sexton told Live Science. (Beware, however: Some places like bathrooms do harbor more bacteria and a greater diversity, he said.)

But exactly what types of bacterial communities are hanging out on our shoes, and do they pose a legitimate health threat? Well, previous studies have shown that (prepare yourself) almost all shoes in some research samples were coated with fecal bacteria, including one prominent bug called Escherichia coli (E.coli), which researchers discovered on 96 percent of shoe soles. While many types of E.coli are harmless to humans, some strains can cause severe diarrhea, urinary tract infections and even meningitis. "Not necessarily on every shoe, but on a good majority, you can find some type of E.coli there," Sexton said.

Apart from this ubiquitous germ, other studies have also found evidence of things like Staphylococcus aureus, which underlies a wide range of skin infections, and more worryingly, infections of the blood and the heart. Another prominent study published in 2014 in the journal Anaerobe sampled 30 households in Houston, Texas, for the presence of Clostridium difficile (C. difficile), a bacterium with a long lifespan that commonly causes bowel problems like diarrhea. Of all the household items they sampled, the researchers found that shoes harbored more C. difficile than even the surface of a toilet — underscoring the power that grubby soles could have to spread germs through a home.

But despite the horrifying picture this paints of microbe-infested interiors, the research doesn't actually give us anything too serious to worry about. While many of us might want to launch into a house-cleaning frenzy at the thought of a wayward shoe, the reality is that the load of bacteria our shoes bring indoors isn't typically high enough to make the average healthy person very sick. "For a healthy individual, bacteria on shoes likely pose no or minimal risk," said Kevin Garey, the author on the 2014 C. difficile study and professor at the University of Houston College of Pharmacy. Usually, a healthy person would need to come into contact with thousands of microbes from one harmful bacterial strain to actually become infected with something, Sexton added. [Why Do People Get Sick When the Seasons Change?]

Another point is that most of us don't spend a lot of time on the ground, where shoe bacteria dwell. "The exposure makes the poison. So if you're not exposed to it, you're not going to get sick from it," Sexton said. In some cases, layers of bacteria coating the floor can become "re-aerosolized" and enter the air we breathe, lifted by the draft from a window, for instance, Sexton explained. That might increase infection risk. But the greatest threat really lies on the ground. "I'd be more worried about a child crawling around on the floor. For a healthy adult, it's not too big of an issue," Sexton said.

Another group of people who may need to take extra precautions are those who are immunocompromised, meaning their defences against infection are lower than usual. "In a person who is at risk for infections — usually someone recently hospitalized — attention to good household cleaning can be important," said Garey. (This is also why hospitals filled with vulnerable patients are much riskier environments to go venturing into with shoes, as there are more harmful germs there that can glob onto your soles.)

In summary, if you're at risk of infection, or you have a small child, "it would be a good idea to take your outdoor shoes off when you enter your home," Garey told Live Science. "For most healthy persons, however, you can make the decision as much based on preference and habit, as potential health concern."

For those whose health is at risk — or those simply too grossed out by the idea of uninvited bacteria in their homes — simply taking off your shoes, cleaning them once in a while and keeping houses clear of dust (a favorite food for bacteria) are good steps to take, Sexton said. "It's always good to take precautions. But I don't recommend people go overboard with it."

The consensus, then, is that for the average household, shoe bacteria don't pose an immediate risk. And it's worth remembering that bacteria exist elsewhere than on our shoes: They're in the air, on our skin, in our hair and inside our very guts. In fact, we live in a constantly swirling bacterial soup that would be impossible to completely disinfect. And would we want to, when we consider that thousands of these microbes are actually important for our well-being?

"Healthy bacteria in our gut, skin and elsewhere keep us healthy and protect us from other bacteria that can cause us illness," Garey said. "I don't think everyone appreciates that some bacteria are also good for us."