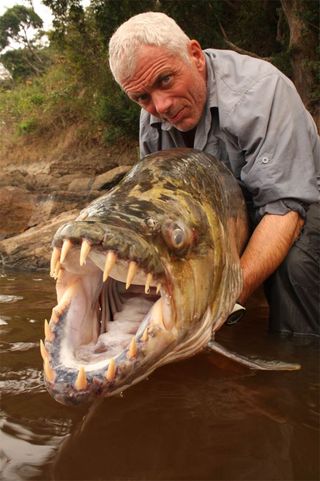 In a widely-seen video clip, biologist and extreme angler Jeremy Wade hooks and wrestles an 80-pound goliath tigerfish (Hydrocynus goliath) on Africa's Congo River. The toothy, scary-looking creature, while real, seems all the more terrifying when shot with a fisheye lens and accompanied by a pounding, dramatic musical score as part of the new Animal Planet show "River Monsters."

Tantalizing tales of fierce aquatic killers have been the fodder of many documentaries, Hollywood thrillers and real-life narratives. But what's real and what's myth?

Piranhas are perhaps the world's best-known river killers, due largely to horror films like "Piranha" (1978), "Mega Piranha" (2010), and the upcoming "Piranha 3-D" (due out in August). Most of us have seen footage of these frenzied killers, their sharp triangular teeth ferociously efficient at ripping flesh.

While piranhas have a fearsome reputation and can be dangerous, piranha attacks on humans are very rare. Piranha will happily scavenge on a mortally wounded animal, though there are few if any confirmed reports of humans being killed by them. (Dogs and bees kill more people than piranha do.)

A relative of the piranha, the Megapiranha, grew to 3-feet-long (1 meter), or four times the size of today's piranhas. Scientists aren't sure why the fish-beast had seven teeth arranged in a zig-zag row, while today's piranhas sport six teeth. Fortunately the mega creature is not much of a threat, having died out several million years ago.

Though piranhas aren't so dangerous to humans, two of the deadliest creatures in Africa often lurk unseen in that continent's cloudy rivers, their deadly jaws and fearsome teeth responsible for hundreds of deaths each year: crocodiles and hippos.

In addition to these real river monsters, people sometimes report seeing mythical ones.

Stories of water-borne supernatural entities and monsters exist in nearly every culture. For example, North American Indian legends tell of many spirits and entities living in rivers and lakes, and Tibetan Buddhists believe in nagas, snake-like creatures that live in rivers and streams. Sadly, hard evidence for true river monsters is as elusive as it is for lake monsters.

That doesn't stop some people from faking evidence, though. In 2009, a photo supposedly depicting a huge serpentine monster in Borneo's river Baleh circulated around the Web. Said to have been taken from a helicopter by a member of a disaster team, a careful analysis of the photo revealed the Borneo river monster to be a fake.

Perhaps one day scientists will be able create a live Megapiranha (a la "Jurassic Park"-style genetic engineering), but until then river monsters are more Hollywood fantasy than fact. Even the goliath tigerfish, billed as a deamon in a YouTube video, ultimately is netted with about as much fight and fanfare than a good 12-inch trout.

Benjamin Radford is managing editor of the Skeptical Inquirer science magazine and co-author of Lake Monster Mysteries: Investigating the World's Most Elusive Creatures; this and his other books and projects can be found on his website. His Bad Science column appears regularly on LiveScience.