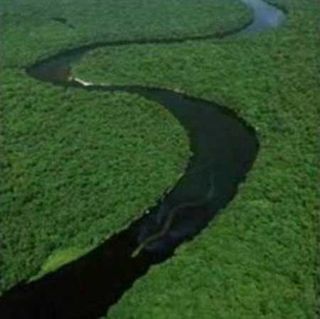 The snake-like monster of Borneo in an allegedly real photograph of the river Baleh. The creature is said to be 100 feet long. Look at the apparent sizes of the trees and make your own geometrical judgment. The photographer is unknown.

Two recently released photographs of a huge snake-like creature allegedly taken in Borneo are causing locals to wonder if a local legend may have come alive.

But are the pictures real?

One photo, of a serpentine shape in the Baleh river, was said to be taken from a helicopter by a member of a disaster team monitoring flood conditions. Locals suggest that the animal may be a creature of folklore called Nabau, a dragon-like, shape-shifting sea serpent. Others aren't convinced.

Linking modern photographs and eyewitness reports to native stories and legends is a common mistake among cryptozoologists — those who look for evidence of mysterious or unknown creatures such as Bigfoot or lake monsters. With so little hard evidence to go on, it's tempting to do, but the problem is that legends and myths may not have any connection to real events. Just because a native culture has a name for a strange monster or creature doesn't mean that the beast ever actually existed.

Fairies, dragons, and leprechauns populate our modern storybooks and legends, but we don't assume they are real.

Stories and legends about "water horses" and kelpies have been told in the Scottish highlands for centuries, often incorrectly assumed to relate to the Loch Ness monster. Native Indian stories in British Columbia, Canada, tell of a fearsome water spirit named Naitaka said to dwell in Lake Okanagan, giving rise to reports of a monster there called Ogopogo. In Tibetan Buddhist beliefs there exist the nagas, snake-like creatures that live in rivers and streams.

Virtually every culture around the world has some version of a water-based spirit, creature, or monster in its folklore. So it's not surprising that some might turn to local myths in Borneo to "identify" the huge snake.

One of the first red flags to go up when considering any extraordinary photograph offered as evidence (of UFOs, Bigfoot, or lake monsters, for example) is an image submitted anonymously. The photographs were taken by an unnamed "member of a disaster team," at an unknown location and date.

Two photos were released; one was taken from a helicopter, the second one wasn't, suggesting that the creature was sighted on two separate occasions. That raises the question as to why there are only two photos; one might expect that a person seeing such an extraordinary creature might snap more than one picture each time.

There's also the interesting composition of the photos: The snake-like creature seems to be posing full-length for the camera. In the aerial photo, it is nicely centered in the middle of the river, and in the other photo it is just high enough above the rooftops in the foreground to see its full length.

Of course it's possible the photographer just got lucky, capturing the giant snake at its most photogenic both times, but that raises another question: If the huge beast spends its time in such high-visibility areas, why is this the first time it's been reported or photographed?

Furthermore, the reported size of the creature cannot be correct. The original estimate given was that the creature was 100 feet long, though the scale of the photos suggest it must be far larger. [Scientists recently found the fossil of a prehistoric snake said to be 43 feet long; it's been extinct for some 60 million years, though.]

Then there's the question of whether the photo was even taken at the Baleh river, since most photographs of its waters show it to be a cloudy river, not the clear, dark blue water seen in the aerial photo. If the photo was actually taken by a disaster team member checking on flooded regions, the flooding runoff would increase the suspended particulates in the water (silt, debris, etc.), creating even cloudier water than usual.

Of course, all these troubling questions vanish if the photographs are simply faked.

{{ video="210607rattlesnakes" title="Snake Trackers" caption="No monsters -- just rattlesnakes and copperheads. But somebody has to chase them." }}

Benjamin Radford is managing editor of the Skeptical Inquirer science magazine. He is co-author of "Lake Monster Mysteries: Investigating the World's Most Elusive Creatures." His books, films, and other projects can be found on his website. His Bad Science column appears regularly on LiveScience.