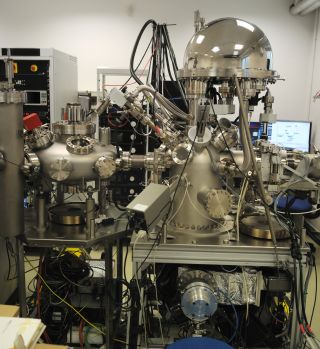 This X-ray photoelectron spectrometer uses the principles of X-ray spectroscopy to measure the elemental composition of materials.
(Image: © Shutterstock)

X-ray spectroscopy is a technique that detects and measures photons, or particles of light, that have wavelengths in the X-ray portion of the electromagnetic spectrum. It's used to help scientists understand the chemical and elemental properties of an object.

There are several different X-ray spectroscopy methods that are used in many disciplines of science and technology, including archaeology, astronomy and engineering. These methods can be used independently or together to create a more complete picture of the material or object being analyzed.

Wilhelm Conrad Röntgen, a German physicist, was awarded the first Nobel Prize in physics in 1901 for his discovery of X-rays in 1895. His new technology was quickly put to use by other scientists and physicians, according to the SLAC National Accelerator Laboratory.

Charles Barkla, a British physicist, conducted research between 1906 and 1908 that led to his discovery that X-rays could be characteristic of individual substances. His work also earned him a Nobel Prize in physics, but not until in 1917.

The use of X-ray spectroscopy actually began a bit earlier, in 1912, starting with a father-and-son team of British physicists, William Henry Bragg and William Lawrence Bragg. They used spectroscopy to study how X-ray radiation interacted with atoms within crystals. Their technique, called X-ray crystallography, was made the standard in the field by the following year and they won the Nobel Prize in physics in 1915.

When an atom is unstable or is bombarded with high-energy particles, its electrons transition from one energy level to another. As the electrons adjust, the element absorbs and releases high-energy X-ray photons in a way that's characteristic of atoms that make up that particular chemical element. X-ray spectroscopy measures those changes in energy, which allows scientists to identify elements and understand how the atoms within various materials interact.

In both techniques, how the radiation is dispersed indicates the atomic structure of the material and therefore, the elements within the object being analyzed.

Today, X-ray spectroscopy is used in many areas of science and technology, including archaeology, astronomy, engineering and health.

Anthropologists and archaeologists are able to discover hidden information about the ancient artifacts and remains they find by analyzing them with X-ray spectroscopy. For example, Lee Sharpe, associate professor of chemistry at Grinnell College in Iowa, and his colleagues, used a method called X-ray fluorescence (XRF) spectroscopy to identify the origin of obsidian arrowheads made by prehistoric people in the North American Southwest. The team published its results in October 2018 in the Journal of Archaeological Science: Reports.

X-ray spectroscopy also helps astrophysicists learn more about how objects in space work. For example, researchers from Washington University in St. Louis plan to observe X-rays that come from cosmic objects, such as black holes, to learn more about their characteristics. The team, led by Henric Krawczynski, an experimental and theoretical astrophysicist, plans to launch a type of X-ray spectrometer called an X-ray polarimeter. Beginning in December 2018, the instrument will be suspended in Earth's atmosphere by a long-duration, helium-filled balloon.

The invisible spray-on antennas are only a few dozen nanometers thick but are able to transmit and direct radio waves. A technique called X-ray absorption spectroscopy (XAS) helps ensure that the composition of the incredibly thin material is correct and helps determine the conductivity. “High metallic conductivity is required for good performance of antennas, so we have to closely monitor the material,” Gogotsi said.

Gogotsi and his colleagues also use X-ray spectroscopy to analyze the surface chemistry of complex membranes that desalinate water by filtering out specific ions, such as sodium.

The use of X-ray spectroscopy can also be found in several areas of medical research and practice, such as in modern CT scan machines. Collecting X-ray absorption spectra during CT scans (via photon counting or spectral CT scanner) can provide more detailed information and contrast about what is going on inside the body, with lower radiation doses from the X-rays and less or no need for using contrast materials (dyes), according to Phuong-Anh T. Duong, director of CT at Emory University Department of Radiology and Imaging Sciences in Georgia.