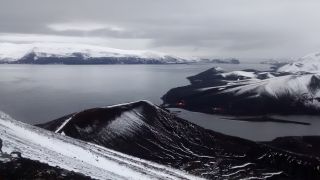 A view into the caldera of Deception Island on a gloomy Antarctic day.
(Image: © Antonio Álvarez Valero)

Horseshoe-shaped Deception Island in Antarctica has finally revealed one of its most closely held secrets — when it exploded.

The island, an active volcano, got its unusual shape during a long-ago eruption that ejected massive amounts of rock and magma to form a bowl-shaped depression called a caldera. Now, researchers know that the massive eruption happened around 4,050 years ago.

Antoniades and his colleagues didn't set out to discover an ancient volcanic eruption. The researchers were studying cores of sediments pulled from lakes on the Byers Peninsula, an ice-free spot on Livingston Island off the tip of the Antarctic Peninsula. In cores from different lakes, the scientists noticed something unusual.

"They all had this section where there was just this massive jumble of sediments that were sitting on top of a volcanic ash layer," Antoniades told Live Science.

The team was aboard a scientific research vessel, alongside scientists from many different fields working on various projects. Some of those scientists were volcanologists, who told Antoniades that he and his team of ancient-climate researchers may have just stumbled upon proof of Deception Island's last huge eruption.

The researchers used a variety of geological and geochemical techniques to link the origin of the layers in the lakes to the ancient eruption. The investigators then used radiocarbon dating, a method that measures levels of a radioactive version of carbon in a sample, to figure out how old the layers were. The results revealed that the layers were deposited just over 4,000 years ago.

Prior to the study, estimates of when the Deception Island caldera formed varied widely, Antoniades said. Many people pegged the timing at around 10,000 years ago, with some estimating the date to be as recent as 3,370 years ago.

"They were kind of all over the map," Antoniades said. [The 11 Biggest Volcanic Eruptions in History]

The reason, he said, is that previous researchers used various measurements to make those estimates, all of which had their own weaknesses. Some researchers, for example, attempted to radiocarbon-date sediments from the ocean floor. But the ocean, Antoniades said, is a major collector of carbon the world over. Carbon that enters the seas near the equator in the form of, say, dead algae can travel long distances and eventually end up near the poles. This old carbon mixes with newer carbon that entered the sediments right on the spot, clouding the accuracy of the dating.

The lakes don't have that problem, Antoniades said. And now that researchers know where in the geological record to look, they may be able to find the fingerprints of the eruption elsewhere in ice cores and ancient sediments. That record, in turn, could help clarify if any of the ancient variations in climate that researchers observe in Antarctica resulted from the eruption.

The team did some of that searching themselves, finding 18 sites with evidence of the eruption. That included one site located 80 miles (130 kilometers) from Deception Island, on King George Island.

Based on their findings, Antoniades and his team estimated that the exploding island sent as much as 14 cubic miles (60 cubic km) of magma skyward. The eruption would have rated a 6 on the Volcanic Explosivity Index (VEI), a scale from 1 to 8 in which each notch up represents a 10-fold increase in the power of the eruption. The explosion of Mount Pinatubo in the Philippines in 1991 was a VEI 6.

That ranking would make the Deception Island explosion Antarctica's largest volcanic eruption in the last 11,650 years, the researchers reported Nov. 22 in the journal Scientific Reports.