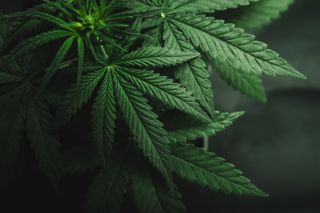 Sorry to break it to you, but you can't get high off hemp. The plant responsible for the ropey bracelets kids make at summer camp produces only trace amounts of the high-inducing compound, THC, or tetrahydrocannabinol. Indeed, these trace amounts of THC are some of the main characteristics that distinguish hemp from its cannabis relative, marijuana.

Still, it's not all bad for hemp: The plant produces another lucrative compound called CBD, or cannabidiol. This nonpsychoactive molecule is the key ingredient in the first-ever cannabis-based drug approved by the Food and Drug Administration. Called Epidiolex, the drug is used to treat rare forms of epilepsy in children.

What's more, widespread beliefs about CBD's other potential benefits have helped build up a $202 million market for hemp oil containing the molecule. [25 Odd Facts About Marijuana]

But how did we end up with these two molecules in the first place?

A team of geneticists, biologists and botanists teamed up to find out. Together, they analyzed the genomes of one hemp and one marijuana strain, publishing the results Monday (Nov. 26) in the journal Genome Research.

This isn't the first time some members of this research team has tried to map out the genomes of the two plants. They previously attempted to do so in 2011, said co-study author Harm van Bakel, a geneticist at the Icahn School of Medicine at Mount Sinai in New York. (Van Bakel does not have ties to any cannabis companies, however, some of his co-authors do.) Back then, the team found that the plants' genomes were full of small pieces of DNA that repeated themselves back to back in several regions of the genetic code.

These repeated chunks don't behave like plant DNA; instead, they behave like viruses, in that they can replicate and insert themselves all over the genome, van Bakel said. This virus-like behavior suggests that these segments may have originally descended from viruses that once infected the plants. What's more, these repeating segments are responsible for the overall length of many plant and animal genomes. In hemp and marijuana, he noted, the segments make up 73 percent of the DNA.

But the analysis tool the team used in 2011 cut the genome into pieces that were too small, making aligning the segments difficult — many of the pieces started and ended with identical repeat segments.

This time around, the research group used an analysis method that mapped out larger chunks of genome. "That was enough to reconstruct a much more contiguous and less fragmented version of the genome," van Bakel told Live Science. The scientists also crossbred the hemp with the marijuana, because the hybrid's genome formed a more complete map of the parents' chromosomes. [10 Amazing Things Scientists Just Did with CRISPR]

These genetic maps showed that the THC and CBD genes are located in slightly different spots on the two genomes but that those genes share a genetic ancestor — one gene that, sometime in the past, duplicated and allowed two new versions, THC and CBD, to develop. The researchers also found that the replicating segments that behave like viruses (and likely were viruses, long ago) wound up in and around the THC and CBD genes, and helped create the duplication event that allowed the genes to evolve into what we have today. And, surprise: The team found a third, similar gene that codes for a molecule called CBC, or cannabichromene, which also appears in hemp and marijuana.

Still, more research is needed to pin down when these divergences in the THC and CBD genes happened and what the ancestral gene looked like, said van Bakel. Those studies will include all other available hemp and marijuana varieties, because both are constantly being bred to produce specific levels of THC and CBD. With a better understanding of how we got these two beneficial genes, farmers may be able to skip the time-consuming breeding process and instead plant varieties they know will create the compounds they want. For example, CBC dampens some THC effects, so nailing the right ratio of the two molecules is important, van Bakel said.

For most other U.S. crops, genome maps exist, as either a draft or something detailed, van Bakel noted. "Cannabis is in the middle of that pack, more towards the end still," he said. Van Bakel, along with his colleagues and other geneticists, plans to keep going — and with the rate the THC and CBD industry is growing, these scientists have some catching up to do.

Editor's note: This story was updated on Nov. 29 to correct Harm van Bakel's affiliation (he is no longer with the University of Toronto) and clarify several points about how the virus-like segments help the plant's gene evolve into what we have today.