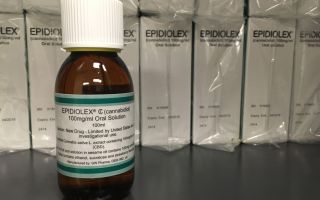 A bottle of Epidiolex, an epilepsy drug that contains cannabidiol.
(Image: © AP/REX/Shutterstock)

A drug made from marijuana that does not produce a high may soon gain official U.S. approval to treat severe forms of epilepsy.

Yesterday (April 19), a panel of advisers for the Food and Drug Administration (FDA) voted unanimously to recommend approval of the drug, called Epidiolex, for treating seizures in people with Dravet syndrome or Lennox-Gastaut syndrome, two types of severe epilepsy that begin in childhood, according to NBC News.

Epidiolex is a purified solution of cannabidiol (CBD), a compound found in marijuana. Although CBD affects the brain, it does not produce euphoria or intoxication, according to the National Institute on Drug Abuse.

The FDA plans to make its final decision on whether to approve Epidiolex in June, according to CNN. If approved, Epidiolex would become the first prescription CBD drug.

The panel based its conclusions on several rigorous studies that tested Epidiolex for the treatment of Dravet syndrome or Lennox-Gastaut syndrome. One recent study, published in May 2017, found that children and young adults with Dravet syndrome who took Epidiolex daily saw their number of monthly seizures cut in half — from about 12 per month to six per month — on average, over the three-month study period. (Those who took a placebo did not experience as much of a reduction in their monthly seizures.)

Many CBD products are already sold online, and claim to help with various conditions, but they are not FDA-approved and often do not have rigorous data to back up their claims, according to NBC News. In addition, these products are not regulated.

The new drug "is not something you can get from a dispensary today in the United States," Dr. Orrin Devinsky, director of NYU Langone Epilepsy Center, told NBC News. "It's not something that you can get by smoking marijuana. It is a very specific pharmaceutical-grade product," which contains 99 percent pure cannabidiol, he said.