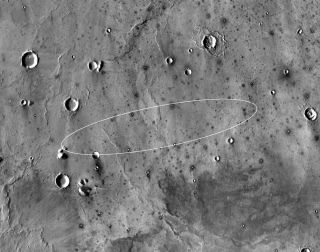 Here's where the Mars InSight lander is supposed to make touchdown on the Red Planet.
(Image: © NASA/JPL-Caltech)

NASA's InSight lander is scheduled to touch downon Mars today (Nov. 26), where it will begin its mission to study "Marsquakes” and the Red Planet's core. Insight's landing area is somewhere in a big oval, situated on the very flat, safe region Elysium Planitia. The flat part makes sense; there's no sense dropping an $850 million piece of equipment somewhere rocky. But why the big oval shape?

Insight could land just about anywhere in an elliptical region about 81 miles (130 kilometers) by 17 miles (27 km) at its widest point, according to Jet Propulsion Laboratory scientist Matt Golombek — though the lander will most likely end up closer to the middle of that region.

Any lander punching through the Martian atmosphere at high speed would have an elliptical landing zone, Golombek told Live Science. InSight's is on the bigger end though, because it will use a less precise (and less expensive) landing system than the Curiosity rover did back in 2012, or the Mars 2020 rover is expected to sometime in the next decade. [Mars Insight Photos: A Timeline to Landing on the Red Planet]

The elliptical shape is the result of two factors, he said: the angle at which a lander enters the Martian atmosphere and the unpredictable wobbling it goes through on the way down.

Entering an atmosphere at high speed requires that a lander catches enough air to slow down without burning up or smashing into the surface, but not so much air that it bounces off into outer space. To pull that trick off, InSight will aim to hit the atmosphere at a precise 12-degree angle, Golombek said. That means that it will have a lot of lateral momentum that will carry it far over the surface, even as it plunges downward.

And as it plunges, it will be wobbling, jostled by unpredictable currents in the Martian air. Those currents will knock the lander side to side as it falls, making it difficult to predict precisely where the lander will end up. [NASA's InSight Mars Lander: Full Coverage]

And the effect of those wobbles, Golombek said, will be amplified by the lander's forward momentum. So even if the wind can shift the lander just 17 miles or so (about 27 km) side to side, the same forces stretch the possible landing area to 81 miles (130 km) along the direction of travel. Thus, that funny, stretched-out ellipse.

Fortunately, NASA has obsessively checked the entire landing zoneand believes it will be safe enough for a comfortable landing even despite all that uncertainty. After 6 minutes of suspense Monday, we'll all know for sure.