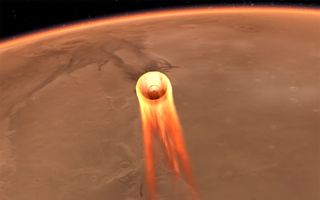 As InSight enters Mars's atmosphere, it will be traveling at around 12,300 mph, generating a tremendous amount of heat.
(Image: © NASA/JPL-Caltech)

When NASA's InSight mission arrives at Mars on Monday (Nov. 26), the probe faces a formidable challenge — perhaps the most harrowing so far of its seven-month journey — touching down on the planet's surface.

Any given moment in the process of launching a spacecraft and propelling it toward a distant target in our solar system carries risks. But InSight's descent will be an especially nerve-wracking nail-biter for NASA: Mission control won't have any idea what's happening to the spacecraft in real time, due to the minutes-long delay in the craft's transmission signal.

During the critical minutes after InSight breaches Mars' atmosphere and hurtles toward the planet's surface, news of the lander's progress won't yet have reached Earth. For 6 long minutes, NASA engineers will tensely wait for InSight's status reports to catch up, leaving the team unable to confirm if InSight landed safely or if something unexpected went horribly wrong. The latter could leave the lander "dead" on the Martian surface. [5 Mars Myths and Misconceptions]

There are three stages that InSight (short for Interior Exploration Using Seismic Investigations, Geodesy and Heat Transport) will undergo as it zooms toward the landing site: a rocket-powered trip through Mars' upper atmosphere; a parachute descent after ejecting the lander's protective heat shield; and a powered descent to the ground, slowed by 12 firing engines, according to NASA. First, the "cruise stage" will separate and the capsule will reposition itself so its heat shield faces the atmosphere, where the shield will heat up to more than 1,800 degrees Fahrenheit (1,000 degrees Celsius), Rob Manning, a systems engineer at NASA Jet Propulsion Laboratory (JPL), said in a video.

Once InSight descends to about 10 miles (16 kilometers) above the surface, a parachute will open, the heat shield will pop off, and the lander's three legs will extend and lock in place, ready to absorb some of the landing impact. When the lander has approximately 1 mile (2 km) to go, it will separate from the back shell — the structure holding the parachute — and fire engines to slow its fall, Manning said.

Finally, InSight's battery of engines will have to power off the second that the lander touches down.

"If they don't, the vehicle will tip over," Manning said in the video.

NASA's last brush with a blind landing on Mars was Curiosity's famed "7 Minutes of Terror" — a descent that lasted 1 minute longer than InSight's will — on Aug. 6, 2012. Footage captured inside the NASA JPL mission control room and shared to YouTube that day, showed team members transfixed as data from Curiosity finally revealed the rover's fate, moment by moment.

In the video, action cuts back and forth between mission control's real-time responses to updates and an animated simulation of Curiosity's landing, created several months earlier.

Applause broke out as the team learned that Curiosity's parachute had deployed, and there were high-fives when the heat shield separated and dropped away. People cheered at the announcement that "We are in powered flight," and at "Touchdown confirmed!" the room erupted in wild applause, jubilant screaming, hugs and more than a few tears.

Reaching Mars is an elusive prize for space agencies worldwide; only 40 percent of all missions to Mars have been successful, and the U.S. is the only nation whose landers have survived their descent, NASA said.

Much of InSight's design, including its three-legged shape, originated with NASA's Phoenix spacecraft, which landed on Mars on May 25, 2008. But InSight's heat shield is thicker and its parachute suspension is stronger than its predecessor's. As InSight will land during autumn in Mars' northern hemisphere, this craft may face powerful dust storms, which the upgrades to the heat shield and parachute will help InSight to weather, according to NASA.

But will all these precautions be enough to safeguard InSight's imminent landing? Only time — 6 minutes, to be precise — will tell.

Tune in to watch InSight's dramatic descent! Live coverage begins at 1 p.m. ET, check our sister site, Space.com, for hints on how to watch.