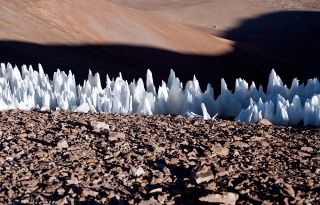 Penitentes ice formations at the southern end of the Chajnantor plain in Chile in 2005.
(Image: © ESO)

It's almost as if Europa has something to protect, something that it doesn't want us to see.

The moon of Jupiter has a saltwater ocean that scientists have long proposed visiting, because at least some researchers think it might contain extraterrestrial life. But there could be a problem: Scientists now report that there's a good chance 50-foot (15 meters) ice blades defend this fascinating place.

In a new paper published yesterday (Oct. 8) in the journal Nature Geoscience, researchers likened the environment at Europa to high altitudes on Earth. In those spots, when the sun blasts fields of ice, it can turn the ice directly into gas, which then drifts away. (The technical term for this phenomenon is sublimation.) The process can leave behind ice that gets carved into strange, spiked formations known as penitentes.

On Earth, these formations are usually limited to at most a few feet (1 or 2 meters) in height. But all the conditions that create penitentes are present on Europa in more extreme fashion, the researchers argued. As a result, Europa's ice spikes might tower as high as a medium-size building. [The Strangest Places on Earth (Photos)]

That could be bad news for incoming spacecraft, the researchers pointed out, like the possible lander component of the Europa Clipper mission scheduledfor the late 2020s.

Researchers haven't seen these spikes directly. (The cameras on spacecraft that have flown past Europa so far just haven't been sharp-eyed enough to spot the features.) And there is some chance that incoming radiation from Jupiter would smooth out jaggedness on the Jupiter-facing side of the icy world.

But radar evidence backs up the researchers' conclusions.

In the past, astronomers have fired radar beams at planets and moons throughout the solar system and recorded how the beams changed when they bounced off those objects and returned to Earth. Beams fired at Europa returned to Earth with evidence that they'd struck an even number of surfaces before reflecting away, which has never happened for other major objects in our corner of space. Astronomers didn't know what this meant, only that it suggested something weird was going on in Europa's ice.

But now, the researchers wrote, giant penitentes on the moon turn out to explain that effect well. Radar beams with wavelengths smaller than the gaps between the spikes would tend to bounce an even number of times before returning toward Earth. This bolsters the idea that there's something waiting on Europa's surface to tear incoming spacecraft to shreds.