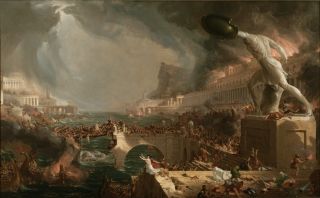 The fall of the Roman Empire may have been a partial result of the decade of famine and plague that began in A.D. 536, the authors of a new study say.
(Image: © Thomas Cole/ New York Historical Society)

It started when a mysterious fog swept over the continent, veiling the sun in a blue haze and casting Europe, the Middle East and parts of Asia into darkness 24 hours a day, for 18 months. Falling temperatures ushered in the coldest decade of the past 2,000 years, crops failed from Ireland to China, and famine ran rampant. Those who endured the long, cold night faced even harsher times in the years to come; in A.D. 541, an outbreak of bubonic plague known as Justinian's Plague scythed through the Mediterranean, killing up to 100 million people.

This series of events was, to put it in scientific terms, a total bummer. Michael McCormick, a medieval historian and archaeologist, recently told Science magazine that the year 536 was "the beginning of one of the worst periods to be alive, if not the worst year." But despite all that is known about the devastation that began then, scientists still aren't sure exactly what caused the mystery cloud of doom to descend over Europe in the first place. [End of the World? Top 10 Doomsday Threats]

Now, McCormick and his colleagues from the U.S., the U.K. and Germany believe they've finally uncovered the answer. In a new study published this week (Nov. 14) in the journal Antiquity, the team analyzed an ancient ice core pulled from the Swiss Alps containing more than 2,000 years' worth of microscopic history lessons. Particles of dust, metal and airborne elements frozen at various levels of the 235-foot-long (72 meters) core hint at how the atmosphere over Europe changed throughout the past two millennia — a Saharan dust storm here, a silver-mining boom there — and, according to the new study, reveal that a massive volcanic eruption in Iceland directly preceded the beginning of Europe's darkest days.

The new study picks up on previous research by several of the paper's co-authors, who in 2015 used a laser to cut ultra-thin slices of the Alpine ice core for chemical analysis. Using this method, the scientists took tens of thousands of core samples, each one representing just a few days or weeks of snowfall throughout history and analyzed the specific atmospheric elements that had been trapped there.

When looking at samples dated to the spring of 536, the team found two microscopic shards of volcanic glass, which were later traced to volcanic rocks from Iceland. According to the researchers, these well-traveled shards are evidence of a massive volcanic eruption that spewed a monstrous plume of ash into the air over the Northern Hemisphere, riding the winds south to Europe and engulfing the sky for more than a year.

While previous research has suggested that a volcanic eruption in what is now the Western United States may have been the cause of Europe's dark days, study co-author Christopher Loveluck, an archaeologist at the University of Nottingham in the U.K., said the Iceland hypothesis is more consistent with the devastation described in historical records. [10 Biggest Historical Mysteries That Will Probably Never Be Solved]

The team also found evidence of two subsequent eruption events in the years 540 and 547. According to the researchers, the combined pollution from this volcanic triple-whammy did more than just block the sun and cool Earth — it may well have set Europe up for a period of death and decline that lasted 100 years.

Luckily, Europe's string of terrible, horrible, no-good, very bad days eventually passed. By the year 640, samples from the Alpine ice core showed signs of a new kind of airborne pollution: lead, released into the sky during a silver-smelting boom. According to Loveluck, a renewed demand for silver represented an economy rebounding in the darkness of starving, disease-stricken Europe, and the emergence of a new merchant class ready to trade in precious metals.