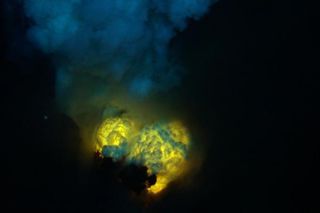 At underwater volcanoes in Southeast Asia, scientists have discovered evidence of ancient distilled seawater that has been preserved for 1 billion years.

Seawater circulation pumps hydrogen and boron isotopes — hydrogen and boron have both light and heavy isotopes, which have differing numbers of neutrons in their nuclei — into the oceanic plates that make up the seafloor. Some of this seawater remains trapped as the tectonic plates descend into the mantle at areas called subduction zones, which are infamous for unleashing huge earthquakes.

When seawater-soaked oceanic plates descend into the mantle, heavy isotopes of hydrogen and boron are distilled away from the slab, leaving behind the light isotopes. But the intense heat and pressure also leaves the slab dry and depleted of all of these elements, making the "isotope fingerprint" of the distillation process difficult to identify.

But this process appears to have been preserved in at least one area: submarine volcanoes in the Manus Basin of Papua New Guinea, which erupted under more than a mile of seawater. Those pressures trap water from the deep mantle within the volcanic glass.

By analyzing samples of glass created by underwater volcanic eruptions there, scientists found unexpected changes in isotopes of hydrogen and boron from the deep mantle. The data indicate that ancient oceanic plates can return to the upper mantle in some areas, and that surface water can be carried into the deep Earth by oceanic plates, where it can be preserved for as long as 1 billion years. The findings could aid in understanding how water is transferred and preserved in the mantle and how it and other chemicals are recycled to the surface.

"The volcanoes in the Manus Basin are delivering a mixture of heavy and light isotopes that have been observed nowhere else," said study team member Erik Hauri of the Carnegie Institution for Science in Washington, D.C. "The mantle under the Manus Basin appears to contain highly distilled ancient water that is mixing with modern seawater."

The research is published in today's (Feb. 26) online edition of the journal Nature Geoscience.

This story was provided by OurAmazingPlanet, a sister site to LiveSciencc. Follow OurAmazingPlanet for the latest in Earth science and exploration news on Twitter @OAPlanet and on Facebook.