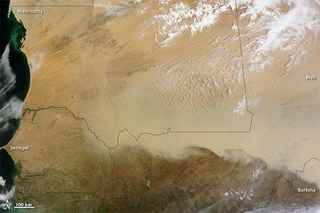 In early May 2011, a dust storm extended at least 1,100 kilometers (700 miles) across the Sahara Desert, according to a NASA statement. The Moderate Resolution Imaging Spectroradiometer (MODIS) on NASA's Terra satellite captured this natural-color image on May 8, 2011.

A thick plume extends roughly east-west across southern Mali and part of Burkina (Burkina Faso). South of the dust plume 's undulating edge, skies are largely clear. Clouds hover over the dust in the north, making the northern margin of the dust storm difficult to detect.

Sandy desert extends from the west coast of Mauritania eastward across that country, and across northern Mali. The vast expanses of sand provide plentiful material for dust storms. Summertime heat also plays a role. The Sahara's scorching temperatures make the air near the ground unstable, increasing the likelihood that even light winds will loft dust particles into the atmosphere.