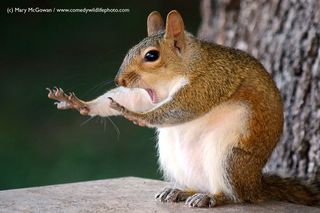 Thousands of photographers submitted their amusing animal images to this year's contest, and the winners were announced yesterday (Nov. 15) on the competition's website.

McGowan's photo shows a wide-eyed and open-mouthed squirrel holding up both paws; the pose, interpreted through a "human" lens, makes the animal appear to be responding in horror to something appalling that it desperately wanted to stop.

Other notable images, selected from 41 finalists, include a barely visible owl demurely peeking over a hill, a "smiling" blue shark and a trampolining fox.

Whether or not nonhuman animals have a sense of humor is a subject of much debate, because humor and animal behavioral motivations can be tricky to define. On one hand, animals other than humans generally lack the cognitive and language capabilities to create or appreciate comedy in puns, ironic twists or wordplay. However, certain primates — such as chimpanzees and bonobos, our closest living relatives — have been found to make "laugh faces" and produce sounds that resemble laughter, Live Science has previously reported.

But even if animals aren't displaying or experiencing emotions related to humor, their expressions or behavior — when captured in photos at just the right moment — can still appear hilarious to the human eye, though the comedy is unintentional.

While the photography contest showcases humor and silliness in wildlife, there is also a serious side to it. The competition collaborates with the Born Free Foundation, an animal conservation organization, and together they hope to inspire people to protect wild animals and their habitats "through a positive and funny message," according to the statement.

All of the winning photos of 2018 can be viewed on the Comedy Wildlife Photography Awards website.