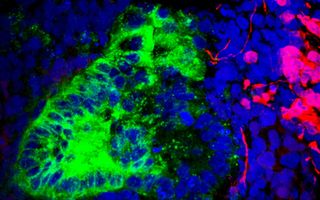 Miniature lab-grown kidneys have been hiding something from the scientists who grew them. Instead of developing into different varieties of kidney cells, some of the cells took a different path and became brain and muscle cells.

These simple mini kidneys — also known as kidney organoids — are grown from stem cells that are encouraged to develop into clusters of specific kidney cells. But it turns out that the "recipes" that encourage the development of specialized kidney cells were also cranking out cells from other organs, according to a new study.

The scientists set out to grow kidney organoids in the lab and then analyze them to see what was happening inside of them, on a cellular level. To do that, the researchers looked at data collected from thousands of the organoids' genes, representing more than 83,000 cells in 65 mini kidneys. They expected to see a diverse variety of kidney cells, comparable to what one would see in a normal, fully grown human kidney. But they discovered that 10 percent to 20 percent of the organoids' cells were not kidney cells at all, but brain and muscle cells. [11 Body Parts Grown in the Lab]

Growing a mini kidney takes about four weeks, said study co-author Benjamin Humphreys, chief of the Division of Nephrology at Washington University School of Medicine in St. Louis. To grow them, stem cells are bathed in a chemical cocktail that nurtures their growth into a range of kidney cells.

"You don't end up with one kidney cell type — you end up with many that approximate the different structures that you find in a real kidney," Humphreys told Live Science.

To identify the cellular makeup of their four-week-old mini kidneys, the study authors used a technique known as single-cell RNA sequencing, which examines activity in individual cells rather than in cell populations. This provides a more detailed view of individual cell identity and function — and in this case, it revealed that some of the mini kidneys' cells were in fact brain and muscle cells.

"We call these 'off-target' cells," Humphreys said. The appearance of these cells can spell trouble for researchers who use kidney organoids to model diseases, "because when off-target cells appear in an organoid, it means that it doesn't faithfully model a human kidney," he said.

Rogue brain cells in the mini kidneys emerged early in the organoids' development, the researchers found. After analyzing the cell receptors in growing organoids, the scientists discovered that they could inhibit the signaling pathways of rogue cells, cutting down on the number of brain cells by about 90 percent. This technique could easily be applied to any type of organoid research, to restrict the growth of off-target cells, the study authors reported.

Genetic data from the mini kidneys delivered another surprise: the kidney cells in the organoids were immature, presenting another potential drawback in using organoids to model diseases, Humphreys said. (The researchers had expected the cells to be mature in four weeks.) What's more, incubating the organoids for longer didn't produce more mature kidney cells; rather, it encouraged the growth of more rogue cells, according to the study.

Future research strategies could focus on fine-tuning the signals that a developing kidney organoid sends to its cells as they differentiate, "to make cells behave more like mature adult kidney cells," Humphreys said.

The findings were published online today (Nov. 15) in the journal Cell Stem Cell.