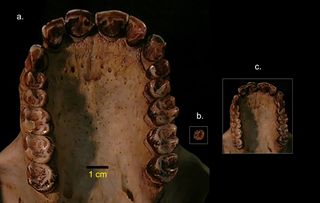 The newfound ape species was tiny, according to its tiny teeth (b), much smaller than a modern chimpanzee, whose jaw is shown (a). When scaled down to fit the size of the newfound ape, the chimpanzee jaw would be super tiny (c).
(Image: © Stony Brook University)

The remains of the smallest ape ever known to walk the Earth may have been discovered in the hills of Kenya, scientists say.

Weighing around 7.7 pounds (3.5 kilograms), the ape lived around 12.5 million years ago in Kenya. While other species of small ape are known to have existed, this one may be the smallest, scientists wrote in a paper set to be published in December in the Journal of Human Evolution.

Named Simiolus minutus, the new species is known from only three tiny teeth, one of which was discovered by James Rossie, an anthropology professor at Stony Brook University in New York, during fieldwork in Kenya's Tugen Hills, in 2004. [In Photos: A Game-Changing Primate Discovery]

Rossie and his co-author, Andrew Hill, an anthropology professor at Yale University who died in 2015, examined the tooth to see if it matched any known species of ape. It did not, though the tiny tooth is anatomically similar, they found, to two other teeth uncovered in previous paleontological expeditions in Kenya. They concluded that the three teeth belong to a new species of ape.

They aren't certain when this species went extinct, but it appears to have been locked in a battle of sorts with colobine monkeys — primates whose living members include the large-nosed proboscis monkey and the South Asian langurs —which were just beginning to appear in the fossil record. (Apes are not monkeys and are on different branches of the phylogenetic tree; they also have several physical differences — apes don't have tails and monkeys do.)

The colobine monkeys were the "new kids on the block," and they had to compete with these tiny apes for food, Rossie told Live Science. Examination of the teeth of the tiny ape species reveal that the animal was eating leaves and fruit. "It was incorporating a significant amount of foliage into its diet," Rossie said.

This mix of leaves and fruit would have put the tiny apes in direct competition with the colobine monkeys, a competition the tiny apes eventually lost. Although monkeys flourished in the fossil record, small apes, such as the newly discovered species, went extinct, leaving only the larger species of apes around.

Scientists have studied the Tugen Hills site extensively since the late 1960s. Hill, and other geologists, used a dating method that relies on a ratio of potassium and argon to date the strata, or layer, of the Tugen Hills where the teeth were found. These tests allowed scientists to determine that the new species lived around 12.5 million years ago.

All three of the teeth samples from the newly discovered species are now in the National Museum of Kenya.