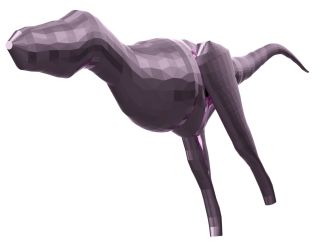 A very pink, digital model of the tyrannosaur Gorgosaurus that, like Tyrannosaurus rex likely turned around more quickly than other theropod dinosaurs could.
(Image: © Andre Rowe; Eric Snively)

Most people don't think of the mighty Tyrannosaurus rex as having the grace of a pirouetting ballerina or the poise of a spinning figure skater, but new research indicates that the dinosaur king was quite good at turning to pounce on prey.

In fact, T. rex and its tyrannosaur relatives were master twirlers — sporting between two and three times the agility of other theropod dinosaurs, a group of bipedal, mostly meat-eating beasts, new research finds.

"An adult T. rex could turn like a slow-motion 10-tonne [9 tons] figure skater from hell," study co-researcher Eric Snively, an associate professor of biology at the University of Wisconsin-La Crosse, told Live Science in an email. "Juvenile tyrannosaurs were much scarier. Their turning ability suggests that tyrannosaurs could successfully attack smaller, younger and/or more dangerous prey than other carnivorous dinosaurs would bother to tackle." [Photos: Fossilized Dino Embryo Is New Oviraptorosaur Species]

The research, which has yet to be published in a peer-reviewed journal, was presented at the 78th annual Society of Vertebrate Paleontology meeting on Oct. 20 in Albuquerque, New Mexico. [See Editor's Note below.]

Tyrannosaurs were humongous — those that lived at the end of the Cretaceous period, which lasted from about 145 million to 65 million years ago, weighed at least 880 lbs. (400 kilograms). But despite these dinosaurs' massive size, research showed that tyrannosaurs were shorter, from nose to tail, and had larger ilia (the upper part of the hip bone) — which allowed more space for large muscle attachment than other, similarly sized theropods did, Snively and study co-researcher Donald Henderson, the curator of dinosaurs at the Royal Tyrrell Museum of Palaeontology in Alberta, Canada, told Live Science. The combination of short body length and large ilia indicated that tyrannosaurs might have had lower rotational inertia (resistance of an object to turning) and leg muscles that could exert greater torque (turning force) to turn their bodies, the researchers said.

These forces are the same ones used in figure skating. "A figure skater can turn more quickly if she pulls her arms in than if she keeps her arms stretched out," Snively said. But while a figure skater with a tight turn might get more points, this dinosaur research has entirely different goals: "The answer might reveal how [tyrannosaurs] hunted and attacked prey," Snively said.

To investigate, the researchers figured out every detail possible about the Mesozoic monsters' mass and bodies. "Our reconstructions included the latest knowledge about muscles and other soft tissues in dinosaurs, including the neck, legs and tail, and lungs and air sacs in their bodies," Snively said.

Then, they estimated how muscle force and leverage affected the creatures' torque and rotational inertia. The results gave each theropod a unique "turning acceleration index," which allowed the scientists to compare the turning ability between different dinosaurs. Next, the research team tested two scenarios: in the first, both of the dinosaur's feet were firmly planted on the ground (which the beast might do if it was exceptionally close to prey) and, in the second, the dinosaur was pivoting on one foot (which it would do while turning to chase its fleeing dinner).

Finally, it was time to compare all of the dinosaurs' turning abilities. Study co-researcher Haley O'Brien, an assistant professor of neuroscience at Oklahoma State University's Center for Health Sciences, plotted these turning indices against the body mass for tyrannosaurs and non-tyrannosaur theropods.

The results showed that tyrannosaurs came out on top. [Photos: Newfound Tyrannosaur Had Nearly 3-Inch-Long Teeth]

"No matter what their body size, tyrannosaurs always seemed able to turn their bodies twice as quickly as other blade-toothed carnivorous dinosaurs of the same mass," such as Ceratosaurus, Allosaurus and Dilophosaurus (best known as the dinosaur in "Jurassic Park" that attacks Dennis Nedry, played by Wayne Knight),  Snively said. Tyrannosaurs could even turn as quickly as theropods half their body size, indicating they were gold medalists not only for their banana-size, serrated teeth and powerful bite force, but also for their agility, the researchers found.

If humans somehow came face-to-face with a T. rex (time-machine inventors, we're looking at you), it would still be smart to run behind it as fast as our little legs could carry us. "In absolute terms, long heavy objects will turn slowly," Snively said. "My colleague John Hutchinson calculated that you could yawn and check your watch before an adult T. rex turned around to catch you."

But T. rex's prey wasn't as lucky. "A big duck-billed Edmontosaurus or a Triceratops would have a harder time scooting behind an adult T. rex," Snively said. "And if a human- or even horse-sized juvenile tyrannosaur was chasing you, you'd probably be toast. Tasty, bloody toast."

Editor's Note: This study has since been published in a peer-reviewed journal. It appeared online on Feb. 19, 2019 in the journal PeerJ.