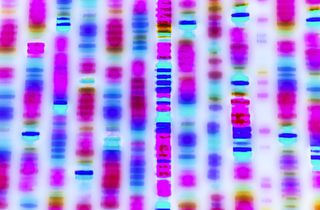 The thing about me is that I'm Jewish. It's not the only thing about me. I'm also 5 feet 11 inches tall, a glasses wearer and into bicycling. But most people who know me probably wouldn't be surprised to learn that most of my ancestors lived in shtetls in Eastern Europe.

So, it wasn't too surprising when I sent off nine DNA samples to three different DNA companies under a variety of fake names, and the results indicated that I'm super-duper Ashkenazi Jewish. (Ashkenazim are Jews who trace their ancestry back to Yiddish-speaking populations inhabiting the region between France and Russia.)

Here's what was a bit surprising, though: None of the companies — AncestryDNA, 23andMe and National Geographic, which works with a testing company called Helix — could agree on just how Ashkenazi I am. [How Do DNA Ancestry Tests Really Work?]

The second sample produced similar — though, interestingly, not identical — results. This bit of Rafi-spit-in-a-tube, it reported, was only 92 percent Ashkenazi, but a full 3 percent Iberian. The rest of the DNA, according to Ancestry, may have traced back to the Middle East and European South or other regions. But each of those sources accounted for, at most, less than 1 percent of my DNA, according to the site.

(Live Science sent a third sample of my DNA to Ancestry under a third name, but an error prevents us from accessing the results.)

Like AncestryDNA, 23andMe concluded from the first DNA sample that my Ashkenaziness ranks somewhere in the low 90s, with a smidge of difference between each of the samples it received. Unlike AncestryDNA, it had a not-entirely-Old World interpretation of where my ancestors may have come from — suggesting that perhaps a fraction of 1 percent of my ancestors were Native American. (Given what I know of my family history, this is almost certainly not true.)

However, while I was reporting on this story, 23andMe updated its system for interpreting DNA samples and reassessed all the DNA already in its system. Now, when I log into 23andMe using the three different names I gave, the reports for two of those names say that I have 100 percent Ashkenazi ancestry. [The Best DNA Testing Kits of 2018]

(A third sample sent to 23andMe has returned no results. Live Science assigned a woman's name to one of the samples that it sent to each company and marked its sex as female. AncestryDNA processed its "female" sample just fine, with no indication of anything unexpected, but both 23andMe and Nat Geo required more personal information before proceeding, since it was from a person with unexpected chromosomes.)

According to Nat Geo, I'm way less than 100 percent Ashkenazi. The genetic service reported that my first sample's ancestry was 88 percent from the "Jewish Diaspora" (in this context, a term that more or less refers to Ashkenazim) and 10 percent from "Italy and Southern Europe."

Nat Geo also reported the biggest difference between its two successful samples, reporting that the second sample it received was 3 percent less "Jewish Diaspora" than the first — just 85 percent. The remainder, this time, was 13 percent "Italy and Southern Europe."

So, nine DNA tests later, I learned this about myself: I'm a whole lot Ashkenazi Jewish. Like, mostly. Or entirely. The rest of my ancestors in recent memory probably also lived in Europe — though who really knows where. And maybe somewhere in my family tree there was a Middle Easterner, or a Native American. But probably (almost definitely) not.

But, of course, I already knew all that.

Scientists who specialize in this sort of research told Live Science that none of this is all that surprising, though they noted that the fact that the companies couldn't even produce consistent results from samples taken from the same person was a bit weird.

"Ancestry itself is a funny thing, in that humans have never been these distinct groups of people," said Alexander Platt, an expert in population genetics at Temple University in Philadelphia. "So, you can't really say that somebody is 92.6 percent descended from this group of people when that's not really a thing."

Log onto a website like Nat Geo's and it chunks the world up into different pieces. Some of your ancestors came from this spot, it says, and they were Central Asian. Others came from that spot over there, and they were Middle Eastern. But that's not what human history looks like. Populations fuzz together. People move around, get together and separate. A person who calls herself an Italian today might have called herself a Gaul a couple thousand years ago and gone to war against the Romans.

To divide people into groups, Platt told Live Science, researchers make decisions: For example, they'll say, the members of this group of people have all lived in Morocco for at least several generations, so we'll add their DNA to the reference libraries for Moroccans. And people who had one grandparent with that sort of DNA will hear that they're 25 percent Moroccan. But that boundary, Platt said, is fundamentally "imaginary."

"There is structure to history," he said. "Certain peoples are more closely related to each other than to other peoples. And [commercial DNA companies] are trying to create boundaries within those clusters. But those boundaries never really existed, and they aren't real things."

In some places this is easier. Non-Jewish European populations, he said, tended not to mix quite as much with others as people elsewhere in the world, so companies can easily draw finer distinctions between them.

But ultimately, it doesn't mean anything to be 35 percent Irish, or 76 percent Finnish. So, when 23andMe changed its mind about my ancestry, the 100 percent answer wasn't more true. It was just another way of interpreting the data.

(In this case, Platt said, the company probably decided that since just about all Ashkenazi Jews have some genes in common with a mix of other European populations, it makes sense to call those genes Ashkenazi as well.)

"It's not really science so much as it's description," he said. "There isn't really a right or wrong answer here, because there is no official designation of what it means to be Ashkenazi Jewish genetically."

It's not really weird to him that there's a 15 percent Jewishness gap between my results in Nat Geo and in 23andMe, he said.

Mark Stoneking, a population geneticist and group leader at the Max Planck Institute for Evoluntionary Anthropology in Leipzig, Germany, agreed.

"If they were to be completely honest, what they should tell you is not that you're 47 percent Italian but that you're 47 plus or minus some error range … based on their ability to distinguish this ancestry and other sources of error that go into the estimation," Stoneking told Live Science.

And it's clear that there are sources of error, he said. Neither Stoneking nor Platt was sure exactly why AncestryDNA had a 1 percent difference between its results for different samples, or Nat Geo had a 3 percent difference, or 23andMe had wiggle room that disappeared with the update. But they agreed that it likely has something to do with their methods for converting a vial of spit into data for the computer to interpret. (Live Science asked all three companies to explain the issue, but none gave a specific answer.) [Genetics: The Study of Heredity]

Each of these companies, Stoneking said, breaks down the DNA in the spit sample into alleles — genetic markers that they use as raw data. But that process is imperfect and clearly doesn't work the same way every time the companies run the rests, he said — though the errors aren't hugely significant.

Should you get your DNA tested?

None of this means an ancestry kit from 23andMe or AncestryDNA or Nat Geo is worthless, Stoneking and Platt agreed.

"I view these things as more for entertainment than anything else," Stoneking said.

The real science of population genetics, he explained, is used to figure out how large groups of people moved and mixed over time. And it's good for that purpose. But figuring out whether 3 to 13 percent of my ancestors came from the Iberian Peninsula or Italy isn't part of that project.

Platt said that he had gotten himself commercially tested, and that while he hadn't found anything surprising, it's always possible for someone to learn something new and interesting — particularly if they're of non-Jewish European ancestry and vague on the details. A white non-Jew might learn something specific and interesting about their background, because their ancestors likely come from highly isolated reference populations on which the companies have lots of data. But folks from other places have lower odds, simply because the data from other places is more limited, fuzzy, and difficult to interpret.

When I contacted the companies and asked them to comment on this story and to address the question of why my results may have differed — even when the test was performed by the same company — both Ancestry and 23andMe responded.

"We're confident in the science and the results that we give to customers. The consumer genomics industry is in its early stages but is growing fast and we tell customers throughout the experience that their results are as accurate as possible for where the science is today, and that it may evolve over time as the resolution of DNA estimates improve[s]. We will always work to harness evolutions in science to enhance our customers' experience. For example, recent developments in DNA science allowed us to develop a new algorithm that determines customers' ethnic breakdown with a higher degree of precision."

And here's the comment from 23andMe, which the representative requested Live Science attribute to Robin Smith, a Ph.D. who holds the title of group project manager at the company:

"Our ancestry reports are a living analysis and are ever-evolving, and as our database grows we will be able to provide customers with more granular information about their ancestry and ethnicity. We are constantly making improvements to both our reference datasets, and the overall pipeline we use to compute customers' Ancestry Composition reports. In fact, we recently rolled out a comprehensive ancestry update earlier in the year, increasing the countries and regions we report on — in order to provide more in-depth information to populations that are underrepresented in the study of genetics.

"There may be inconsistencies across DNA ancestry tests due to differing algorithms and reference panels that differ in key respects."

Nat Geo did not respond to multiple requests for comment by press time.