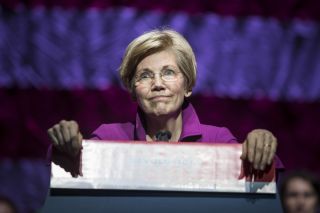 On Monday, Sen. Elizabeth Warren (D-Mass.) released results from DNA testing, suggesting she has Native American ancestry and thrusting the issue of genetic testing and Native American identity into the spotlight.

The DNA report comes after years of political back-and-forth exchanges between Warren and Republican opponents, who accuse her of pretending to have Native American blood to further her law career. A DNA "fact check" on a political debate would have seemed like science fiction even a few election cycles ago. Even today, though, DNA ancestry testing is not as simple as it might seem, especially when it comes to the search for a Native American identity. [How Do DNA Ancestry Tests Really Work?]

"It's important to be thinking about where community and culture is derived from," said Matthew Anderson, a geneticist at The Ohio State University, who is of Eastern Cherokee descent. "It's not the DNA."

Warren, who was born in Oklahoma, has long held that her relatives on her maternal side had Native American blood, a family story that has been passed down from generation to generation. The new DNA test shows that Warren does indeed have five segments in her genome that are common to indigenous American populations. Carlos Bustamante, a Stanford University geneticist who conducted the analysis, told the Boston Globe that the results indicate that Warren had a Native American ancestor six to 10 generations back. The results seem trustworthy, genetics experts contacted by Live Science said.

Bustamante's assessment is "plenty good enough to do what he says," said J. Douglas McDonald, a professor emeritus of chemistry at the University of Illinois who developed biogeographic analysis software for ancestry testing.

But Warren's results wouldn't qualify her to seek tribal membership. Tribes determine their own rolls (list of members) and do not use DNA ancestry testing to do so. Some use genealogy research and set certain requirements for the percentage of Native American blood needed to qualify for membership; others require applicants to prove that they are related to someone already on the tribal membership rolls.

"A DNA test is useless to determine tribal citizenship," Cherokee Nation Secretary of State Chuck Hoskin Jr. said in a statement. "Current DNA tests do not even distinguish whether a person's ancestors were indigenous to North or South America."

Indeed, Bustamante told the Boston Globe that he compared Warren's gene sequences to genetic segments from South American indigenous populations, because there is only a limited amount of data available from native North American populations. Because South and North American indigenous people share common ancestors — a population that probably crossed the Bering Strait at least 15,000 years ago — they also have more genetic sequences in common than they do with people of European ancestry. But that information is far too unspecific for the test to be able to assign a person's ancestor to a certain tribe. [In Photos: Human Skeleton Sheds Light on First Americans]

In fact, no DNA test can conclusively prove or disprove a person has an ancestor of a specific ethnicity. Results are reported in terms of probabilities, not certainties, Anderson said. That's because of the way genes are passed down.

It's easy to imagine that if only one of those 64 great-great-great-great grandparents were Native American, their contribution could be hard to find amid the rest of your DNA, particularly since commercial DNA tests don't screen the entire genome, but rather certain segments of it. (Different commercial tests also screen different segments of the genome, which is why ancestry results can differ slightly from test to test, according to Roots & Recombinant DNA, a blog authored by genetic genealogist T.L. Dixon.)

The picture gets even blurrier, because the amount of DNA passed down is not fixed. Strands of DNA randomly recombine as they're passed down from sperm and egg; this random reshuffling can mean that any given great-great-great-great grandparent contributes even less than the 1.56 percent they're theoretically allotted. [Genetics by the Numbers: 10 Tantalizing Tales]

Because of this reshuffling, the genetic contribution of a known ancestor can essentially disappear, or "wash out" after a few generations.

Genetic washout becomes particularly likely when a specific ethnic group is prevented from mixing with the wider population, as has happened with Native Americans, thanks to the U.S. government's policies to remove them from their land and isolate them on reservations, Dixon wrote. That means that someone could have a Native American ancestor, but no genetic contribution from that ancestor in their DNA.

On the other hand, a DNA test that reveals segments common to Native American populations can't prove your ancestor was indigenous. Because Native Americans share common ancestors with East Asians, a "Native American" genetic segment might originate from an East Asian ancestor. Again, it's all about probabilities, Anderson said. Typically, the more segments you have that are associated with a specific ethnicity, the more likely you are to be descended from people of that ethnicity. But since such variants appear the world over in different populations and different frequencies, "It's challenging to say that just because you have a specific variant, you are inherently derived from a certain population," Anderson said.

Historical policies about who "counted" as Native American blur the lines, too. Some Asian populations who immigrated to the United States in the 1700s and 1800s ended up lumped in and living among Native Americans, and many tribal members today have genetic backgrounds chock-full of European, African and Asian DNA, thanks to historical admixture (a genetics term for the mixing of different populations). This can mean that people who are legally and culturally Native American have DNA with relatively few "Native American" sequences.

An example of the complications of blood and culture is the Cherokee Freedmen case, a dispute over tribal membership that reached the Cherokee Nation's Supreme Court in 2006. The Cherokee Freedmen were the descendants of slaves held by Cherokee tribe members. After emancipation, these Freedmen were first allowed to join the Cherokee Nation. But in the 1980s, the tribe's citizenship laws changed to require a genealogical connection to a tribe member who was listed as Cherokee by blood on the Dawes Rolls, a federal government list of Cherokee members dating to the early 1900s. This change stripped many Freedmen of their tribal citizenship, despite the fact that they were culturally Cherokee and had descended from generations of relatives who were also culturally Cherokee. The legal debate lasted through 2017, when a U.S. District Court ruled that the Freedmen had rights to Cherokee citizenship, and the Cherokee Nation accepted the ruling.

"Folks forget that people we would assume are black can be Native American as well, and they get left out of these conversations entirely," Anderson said.

Many tribes are wary of genetic testing because of their history of forced relocation and assimilation, according to the American Indian & Alaska Native Genetics Resource Center. Tribes have also had fraught interactions with medical researchers, as in an Arizona State University project with the Havasupai Tribe of the Grand Canyon. In that case, blood samples originally collected in the late 1980s were later used for additional research projects without participants' consent, resulting in a lawsuit. Some tribes, like the Navajo Nation, have issued moratoriums on genetic research on their lands. Other tribes, like the Salt River Pima-Maricopa Indian Community, have built partnerships with researchers so they have a say in how studies are conducted. Still, data on Native American DNA remains relatively sparse compared to some other groups, according to Dixon.

The advent of commercial genetic testing flooded the offices of many tribal authorities with applications based on DNA results alone, Anderson said. While many early tests overestimated probabilities based on small amounts of ancestry, McDonald said, today's Ancestry.com tests seem to be doing a better job avoiding bogus results. No matter how accurate the tests are, however, they can't define Native American identity.

"What communities are you part of, what stories do you have, what traditions have you maintained," he said. "Those are the things that define who you are, more so than what fraction of the genome you have."