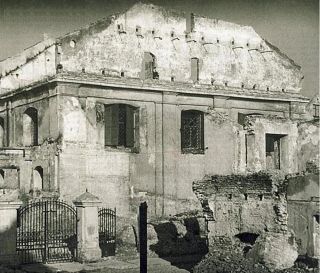 Parts of a Nazi-destroyed Jewish synagogue in Lithuania are seeing the light of day again after archaeologists unearthed the religious center's buried bimah, or central prayer platform, in a recent excavation.

The find is the culmination of a three-year project to excavate the former site of what was known as the "Great Synagogue of Vilna," a title that comes from an old name for the city of Vilnius, the capital of Lithuania.

While the Nazis destroyed many Jewish synagogues during World War II, the Great Synagogue of Vilna was a tremendous loss, as it had served as the spiritual center of the Jewish community in Vilnius for hundreds of years, from the 1600s until the 1940s, said Jon Seligman, an archaeologist with the Israel Antiquities Authority who is leading the international team of archaeologists carrying out the excavations. [Photos: Unusual Mosaics Decorated Ancient Synagogue in Israel]

The synagogue was burned down during the Nazi German occupation from 1941 to 1944, when most of the tens of thousands of Jews who lived in Vilnius were murdered, Seligman told Live Science.

After World War II, when Lithuania was part of the Soviet Union, the ruined synagogue was leveled and then built over, first with a kindergarten and later with a primary school. Over the past few years, archaeologists have surveyed the site with ground-penetrating radar, hoping to discover and study remnants of the famous synagogue, Live Science previously reported.

That project was a success: During the recent excavations, archaeologists located the bimah of the Great Synagogue, along with some of the floor tiles surrounding that platform, in a part of the structure buried beneath the former school principal's office, Seligman said.

The bimah (pronounced bee-mah) was a raised platform at the geometrical center of the square-shaped sacred building, where passages from the Torah, the Jewish holy book, were read aloud. Congregants would have marveled at this structure during services; the bimah was made with green and brown bricks, in a "Tuscan Baroque" style that was popular when the Great Synagogue was built, in the 1630s, Seligman said.

"Jerusalem of the North"

Jewish people began moving into Vilnius in the 14th century, when the King of Lithuania first gave them permission to live there, Seligman said. The site archaeologists are now excavating has been used as a synagogue by the city's Jewish community since the 1440s.

At first, all the buildings in the city were made of wood, including the synagogue. But in the 1600s, architects were brought to Vilnius from Italy and Germany to rebuild the city in brick. The famed Great Synagogue was built at that time, Seligman said.

During the 17th century, Vilnius attracted many Yiddish-speaking writers and scholars, earning the city the nickname the "Jerusalem of the North," Seligman said.

The Great Synagogue towered over the streets and alleyways of the "Shulhoyf," the name given to the Jewish neighborhood in Vilnius. The synagogue suffered a destructive fire in 1748, but it was rebuilt by benefactors, according to Jewish Heritage Europe, which tracks news about Jewish monuments and heritage sites in Europe.

Lithuania's early Christian authorities may have unknowingly helped protect the lower parts of the synagogue from complete destruction in the 20th century.

"The authorities demanded the synagogue not be higher than the churches in the city," Seligman said. And so, the floor of the Great Synagogue was built below the ground level, which allowed the architects to maximize the internal height of the stately central chamber without breaking the external height restriction. [Images: The Church of the Holy Sepulchre]

That feature helped, in turn, to protect the lowest levels of the synagogue when the Nazis burned it down in 1941 and the Soviet authorities built over the site in the mid-1950s, Seligman said: the floor and bimah of the buried synagogue were found about 9 feet (3 meters) below the current ground level, the archaeologists reported.

Until World War II, around half of Lithuania's 240,000 Jews lived in the capital Vilnius, but Nazis and their sympathizers killed most of the Jewish population during the occupation of Lithuania by Nazi Germany between 1941 and 1944.

Although the Nazis used a system of concentration camps for the imprisonment and murder of Jews in Western Europe, in Vilnius and other Eastern European cities, Jews were forced to live in closed-off "ghetto" districts.

Death-squads of German and Lithuanian paramilitary troops frequently raided the Vilnius ghetto, and by late 1944, up to 70,000 Jews had been shot to death beside mass graves in the Paneriai (or Ponary) Forest a few miles from Vilnius, according to Yad Vashem, the World Holocaust Remembrance Center.

Tens of thousands more perished in the ghettos themselves and in Nazi work camps in Eastern Europe.

Seligman said that the last three years of excavations at the Great Synagogue site in Vilnius, by a team of by Lithuanian, Israeli and U.S. archaeologists, was paid for mainly by Lithuania’s Good Will Fund, which is funded by compensation from the Lithuanian government for Jewish property seized by the Nazis and then kept by the Soviet regime.

The news agency AFP reported that the bimah and other artifacts from the Great Synagogue will become part of a Jewish memorial center on the site of the former school, which closed last year. "The school will be demolished within two years, and we'll create a respectful site, displaying rich Jewish heritage by 2023, when Vilnius celebrates its 700th birthday," the mayor of Vilnius, Remigijus Simasius, told the AFP.

Seligman said that other parts of the Great Synagogue found in the recent excavations included two ritual baths, or mikvahs. And there's more to come: Archaeologists hope to locate the external walls of the synagogue and excavate its floor level, he said.