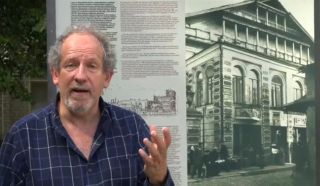 Archaeologist Jon Seligman stands next to a picture of the Great Synagogue of Vilna in Lithuania. Nazi destroyed the synagogue, and now archaeologists are searching for its remains.
(Image: © Courtesy of Israel Antiquities Authority)

Ground-penetrating radar is helping archaeologists locate the buried remains of the Great Synagogue of Vilna in Lithuania, a Jewish place of worship that was destroyed by the Nazis during World War II, the Israeli Antiquities Authority (IAA) reports.

The synagogue dates back to the 1600s, when it was built in a Renaissance-Baroque style. Lithuanian Jews, also known as Litvaks, worshipped there until it was lost during the Holocaust about 70 years ago, according to the IAA.

In June, archaeologists used radar to locate the remains of the synagogue, now partially buried under a modern school. Excavations of the synagogue are scheduled to commence in 2016, and any artifacts found will be put on display as part of a memorial for the synagogue and its congregation, the IAA said. [In Photos: Amazing Ruins of the Ancient World]

"Though this building is now lost, much of the information of the original structure will be found underground," Jon Seligman, an archaeologist with the IAA, said in a video. "During the excavation, we have every possibility of finding not only part of the arc [known as] the Aron Kodesh, but also the bimah [the platform where the Torah was read] and also parts of the mikveh, the ritual baths, which were in the back of the structure."

During the initial survey, researchers used ground-penetrating radar to create a map of the synagogue's remains. The radar device, which looks a bit like a LEGO lawnmower, can send FM radio waves about 16 feet (5 meters) deep into the ground. When the waves hit parts of the buried structure, they bounce back, helping the researchers create a map of the underground environment, said Harry Jol, a professor of geography and anthropology at the University of Wisconsin-Eau Claire.

The radar sends signals every 2 inches (5 centimeters), which will help the researchers turn the maps into a 3D grid of the buried synagogue, Jol added.

What's more, the radar is "noninvasive and does nothing to affect the school behind us," Richard Freund, a professor of Juadic studies at the University of Hartford in Connecticut, said in the video. The detailed maps will also help the researchers do "pinpoint archaeology," meaning they will know exactly where to dig without significantly damaging the school or the surrounding site, Freund added.

During its heyday, the Great Synagogue of Vilna was the epicenter of a thriving Jewish population in the region. It was surrounded by a number of buildings that formed an inclusive center for Torah study, including 12 other synagogues, the community council, the famous Strashun Library, kosher meat stalls, a complex of ritual baths and other communal institutions, the IAA said.

It was also a vibrant center of "Mitnagdim," a European Jewish, or Ashkenazi, movement that opposed the rise of Hasidic Judaism, a group that supports the spirituality and internalization of Jewish mysticism, the IAA said.

However, after centuries of use, the synagogue was ransacked and burned by the Germans during World War II. Later, the Soviets demolished the remains, and a modern school was built on the site, according to the IAA.

Archaeologists will direct the 2016 excavation, and student volunteers from Lithuania and around the world are encouraged to take part in the project by applying at the IAA website.