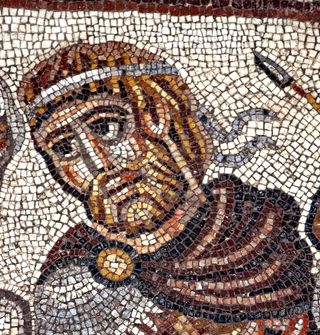 The new mosaic discovered in an ancient synagogue in Israel depicts a story from Jewish legend. Alexander is one of the characters from the legend.
(Image: © UNC)

A gruesome and bloody battle scene once decorated the floors of a 5th century synagogue in a Jewish village in northern Israel.

The mosaic is divided into three horizontal panels and measures about 10 feet (3 meters) by 6.5 feet (2 meters). The lowest section shows a dying soldier carrying a shield, and a bull stuck by several spears, with blood oozing out of the wounds. The gory scene found glittering on the synagogue's tiles surprised the dig team.

"This is the first time that a non-biblical story has been found decorating an ancient synagogue," Jodi Magness, excavation leader from the University of North Carolina, Chapel Hill, told Live Science in an email. [In Photos: Amazing Ruins of the Ancient World]

The middle panel of the mosaic depicts a seated old man holding a scroll, surrounded by younger men. Arches frame the whole scene, each one crowned with glowing oil lamps. The top panel shows a man leading a bull by its horns, and a group of soldiers and elephants clad in armor. The elephants were the first clue that the story depicted in the mosaic was not a biblical one, the researchers said.

"Battle elephants were associated with Greek armies beginning with Alexander the Great, so this might be a depiction of a Jewish legend about the meeting between Alexander and the Jewish high priest," Magness said in a statement. "Different versions of this story appear in the writings of Flavius Josephus and in rabbinic literature."

The first excavation of the site, in 2012, unearthed a mosaic depicting the biblical character Samson, shown with foxes. The scene reflects the Bible story in the book Judges, where Samson ties torches to the tails of foxes to burn the Philistine's crops.

During the next summer, Magness discovered a second mosaic that depicts another story about Samson. The scene comes from a story (also in the book of Judges) in which the biblical hero pulls the gate of Gaza out of the wall, shoulders it and carries it up a hill.

Magness and the team said they hope the excavation of the synagogue will reveal more about the relationship between ancient Christians and Jews. In the 2nd and 3rd centuries, the Roman rulers in Israel were pagans, and likely would have allowed Jews to build large synagogues. But in the 5th century, when Christians seized power, Jews likely did not enjoy the same level of tolerance, historians and archaeologists believe. However, Magness thinks the synagogue she discovered dates back to this oppressive era. If it's confirmed, the discovery could change what some scientists believe about the relationship between ancient Christians and Jews.

The dig team removed all three mosaics from the site for preservation. Excavation of the synagogue will continue next summer.