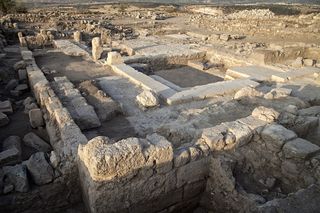 Located at the site of Huqoq, near the Sea of Galilee, the recently uncovered medieval structure was created during the 12th to 13th centuries.
(Image: © Jim Haberman)

A medieval building that may have been used as a synagogue has been uncovered at the site of Huqoq, a village near the Sea of Galilee in Israel.

Constructed during the 12th to 13thcenturies, the building is located on top of the ruins of a fifth-century Roman synagogue known to contain fantastic mosaics, including one depicting the story of Noah's Ark.

The medieval builders put to use some of the remains from the fifth-century synagogue.

"A monumental public building was erected on the same spot as the late Roman synagogue, reusing some of the earlier structure's architectural elements, but expanding it in size," said Jodi Magness, the director of the Huqoq excavation project, during a presentation of the research in Toronto at the joint annual meeting of the Archaeological Institute of America and the Society for Classical Studies this month. [Photos: Unusual Mosaics Decorated Ancient Synagogue in Israel]

The medieval builders reused the north and east walls of the ancient synagogue, as well as ancient columns and pedestals (a base that a column can be placed on), placing them on top of low walls called stylobates, Magness said.

What was it used for?

It's not known what the medieval building was used for, Magness said. As it was clearly a public building, Magness said she believes that it likely served as a church, a mosque or a synagogue. Historical accounts say that during the 12th and 13thcenturies, the Crusaders and Mamluks (a Muslim people) battled for control of the area around Huqoq.

Though the identity of the building is uncertain, one clue suggests that the building is a synagogue. Archaeologists found that the medieval building has benches lining the east, north and west walls, something that "suggests it must be a synagogue," said Magness, who noted such benches are commonly seen in synagogues.

However, there is no historical information about a Jewish population in the area at the time, Magness said. The team has been searching for evidence in medieval records for a Jewish people, but has not come up with much in the surviving texts.

"So far, I've found very little evidence of a Jewish presence in the area, which makes this structure both extremely exciting and frustrating," study researcher Arnold Franklin, a history professor at Queens College of the City University of New York, told Live Science in an email.

One of the few textual references comes from an early 14th-century traveler named Ishtori Haparchi (also spelled Ishtori Ha-Parchi), who "visited Huqoq — then called Yakuk — and reported seeing a 'synagogue with a very old floor.' We speculate that perhaps our building is that synagogue," Magness said.