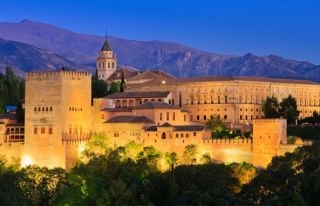 The Alhambra palace in Granada, Spain was built between 889 and 1333 by the Moors, Muslim conquerors from North Africa. New evidence suggests the Moors left their traces on the genetics, as well as the architecture and culture, of Spain.
(Image: © S.Borisov | Shutterstock.com)

Southern Europeans get a significant portion of their genetic ancestry from North Africa, new research suggests.

The findings are perhaps not surprising, given that the Romans occupied North Africa and set up extensive trade routes in the region, and the Moors, a North African people, ruled a medieval territory called El-Andalus on the Iberian Peninsula.

But the findings, published today (June 3) in the journal Proceedings of the National Academy of Sciences, suggest the impact of these connections went beyond culture and architecture, and may explain why Southern Europeans have more genetic diversity than their northern counterparts.

"The higher level of genetic variation in Southern Europeans reflects gene flow from North Africa during historical times. We're talking about the last 2,000 years, really from the Middle Ages during which there was occupation in Spain," said study co-author Carlos Bustamante, a geneticist at Stanford University.

Past studies had shown that Southern Europeans such as Spaniards, Greeks and Italians had more genetic variability than people from Northern Europe; other studies showed they had a small percentage of what looked like sub-Saharan ancestry. [The 10 Things That Make Humans Unique]

Some argued that this genetic diversity came from the Moorish occupation of the Iberian Peninsula in southwestern Europe or the Roman contact with North African civilizations such as Carthage around 2,000 years ago.

But because researchers didn't have DNA samples from people in North Africa, the link was difficult to prove.

To untangle European ancestry, Bustamante and his colleagues compared existing DNA samples of 2,099 individuals from 43 different populations in Europe and Africa. Crucially, they included new genetic samples from North Africa and Spain.

The team found that for Southwestern Europeans (those from Italy, Spain and Greece), between 4 and 20 percent of their genomes came from North Africa, compared to less than 2 percent in Southeastern Europe.

The study also found that the apparent sub-Saharan ancestry in these populations was actually the result of North African lineage.

The findings suggest contacts between the two continents left traces in the genetics of people of the Iberian Peninsula.

"Studies such as this are key to improving our understanding of the impact of historical events and migration patterns in recent human history," Graham Coop, a population geneticist at the University of California, Davis, who was not involved in the study, wrote in an email. "There had been evidence of this contribution before, but the magnitude of the genome-wide contribution had been underestimated, in part due to the lack of dense sampling of Northern African populations."

Though the findings are fascinating, the study researchers weren't able to resolve how much of this North African genetic component emerged during Roman times versus during the more modern Moorish occupation, said Priya Moorjani, a geneticist from Harvard University, who was not involved in the study.

"It would be really exciting to look at all these events, but with modern DNA it can be quite hard to do that."

Instead, looking at ancient DNA from fossil skeletons of Romans and Moors could help to answer those more detailed questions, Moorjani said.