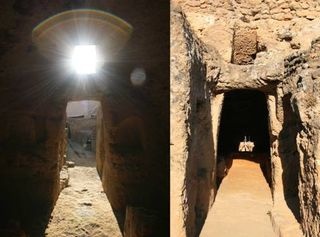 A peek inside the Elephant's Tomb, thought to be originally built as a Mithraic temple.
(Image: © University Pablo Olavide)

Some astronomical sleuthing has revealed the cultic past life of a Roman tomb in Spain. Researchers believe the burial site was once used as a Mithraic temple, positioned to line up with the constellations and guide sun through its window during the equinoxes.

The Carmona necropolis in Seville is full of burials from the 1st century B.C. through the 2nd century A.D., including the so-called Elephant's Tomb, named so for an elephant-shaped statue discovered inside the structure.

Researchers have debated what this structure was used for and archaeologists from the University of Pablo de Olavide in Seville now propose that it served as a place of worship for devotees of Mithraism, a cult that thrived during the Roman Empire.

"In some stages, it was used for burial purposes, but its shape and an archaeoastronomical analysis suggest that it was originally designed and built to contain a Mithraeum [temple to Mithras]," study researcher Inmaculada Carrasco told the Spanish news agency SINC.

"From our analysis of the window, we have deduced that it was positioned so that the rays of the sun reached the centre of the chamber during the equinoxes, in the spring and autumn, three hours after sunrise," Carrasco was quoted as saying.

The researchers even think the light may have illuminated a now-lost statue of Mithras slaying the bull, the central image of the cult.

The building was also strategically placed with respect to the constellations, the researchers say. During the spring equinox in the 2nd century, Taurus would rise to the east while Scorpio would be hidden the west. These positions would have been flipped during the autumn equinox.

Taurus and Scorpio were particularly important to Mithraism. In images of Mithras killing the bull (Taurus), a scorpion is often shown pinching the dying beast's testicles.

Carrasco told SINC that the structure has shares some features with typical Mithraeums, including a room divided into three chambers, with a shrine or altar illuminated by the window at the head.

"The presence of a fountain is also highly significant as these are commonly found in the Mithraeums," Carrasco added.

When it was neglected by worshippers, the structure was repurposed for burials, the researchers say.