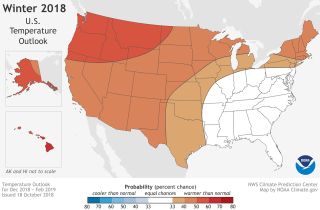 The winter outlook 2018-2019 map for temperature shows higher than average temperatures across much of the U.S.
(Image: © NOAA)

Most of the United States can look forward to a mild winter with above-average temperatures, particularly in Alaska, Hawaii and the northern and western states, experts with the National Oceanic and Atmospheric Administration (NOAA) announced today (Oct. 18).

Officials with NOAA's Climate Prediction Center (CPC) shared their predictions at a news conference, describing the outlook for winter precipitation and temperatures in the U.S. from December 2018 through February 2019.

Below-average temperatures are expected to be scarce in every part of the U.S., but there's likely to be plenty of snow or rain, with wetter-than-average conditions predicted for the southern part of the country and up into the mid-Atlantic states, according to the NOAA winter outlook. [In Photos: Best National Parks to Visit During Winter]

A developing El Niño — part of an ocean-climate cycle that can influence weather — could also leave its mark on the winter weather, as El Niño typically brings wetter conditions to the southern U.S., while shaping warm, dry conditions in the North, Mike Halpert, the CPC's deputy director, explained at the news conference.

Northern Florida and southern Georgia have the highest probability of experiencing a wetter-than-average winter, according to the report.

Though El Niño is still taking shape, there's a very good chance — about 70 to 75 percent — that it will emerge over the next few months and persist through the winter, Halpert said. El Niño is part of a climate cycle known as the El Niño Southern Oscillation (ENSO); during El Niño, warm Pacific Ocean waters shift to the eastern coast of South America. In a strong El Niño year, ocean temperatures are even warmer than average. This phenomenon heats the air above the water and sets up a feedback loop between the sea and the atmosphere, which can dramatically impact weather patterns.

A powerful El Niño can bring unusually warm winter temperatures to the U.S. The winter of 2015 to 2016, which took place during the strongest El Niño in 60 years, was the warmest winter on record for the continental U.S., Halpert said.

However, this year's El Niño is anticipated to be much weaker than that, he added.

As for drought predictions, some relief is expected in Arizona, New Mexico, the southern parts of Colorado and Utah, and the coastal Pacific Northwest.

But drought conditions are expected to persist in the northern Plains states; in Southern California and the interior parts of the Pacific Northwest; and in the central Rockies, the central Plains states and the central Great Basin.

While there is always a certain amount of uncertainty in long-term weather and drought predictions such as these, the track record for the accuracy of the CPC seasonal outlooks is about 40 percent, up from a previous estimate of 30 percent, Halpert said.

"That's the general level for these type of forecasts," he added.