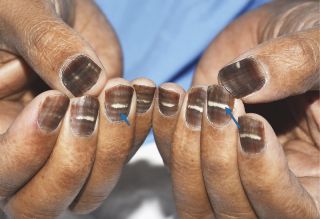 Chemotherapy can have odd effects on a person's hair and nails, but in one man's case, the cancer treatment created a particularly striking pattern.

The 42-year-old man, who lives in Saudi Arabia, was diagnosed with non-Hodgkin lymphoma, a cancer that starts in a type of white blood cells called lymphocytes. He underwent four cycles of chemotherapy, according to a new report of his case, published yesterday (Oct. 17) in The New England Journal of Medicine.

Five months after his initial diagnosis, the man's doctor noticed changes in the patient's fingernails: They had turned brown, with smooth, horizontal, white lines extending straight across them. [10 Do's and Don'ts to Reduce Your Risk of Cancer]

But what caused this to happen?

The brown discoloration is due to a condition called "melanonychia," which occurs when the nail has excess melanin, a dark brown or black pigment that colors the hair, skin and iris of the eye.

As for the lines across the nails, which look like a manicurist painted them on, they have two causes. The opaque lines, called Mees' lines, can result from an injured nail matrix. (The nail matrix is part of the tissue that lies beneath the white part at the base of the nail, where new nail forms.) The more-translucent lines, called Muehrcke's lines, can result from changes to the blood vessels in a person's nail bed, according to the report. When you press on the nails, the Muehrcke's lines will start to disappear, but the Mees' lines won't.

These lines "are not super common, but they're not rare," said Dr. Marc Glashofer, a dermatologist at The Dermatology Group in northern New Jersey who was not involved with the man's case. Chemotherapy is "notorious, sometimes, for causing skin and hair and nail changes," Glashofer added. Indeed, chemotherapy drugs are known to cause these specific lines and colors, according to the report.

Dr. Musa Alzahrani, a co-author on the case report and hematologist at the King Saud University in Saudi Arabia, agreed that "it is not uncommon to have one [type of] nail change." However, "having three [types of] changes at the same time is rare," Alzahrani told Live Science in an email.

Chemotherapy isn't the only cause of nail changes, however; various medications can lead to Mees' lines. If somebody came in with any kind of nail change, "my first question would be … any new medications?" Glashofer told Live Science.

Other factors, such as low protein levels, can also lead to Muehrcke's lines.

Skin, nail and hair changes can be "windows into the body, into what's going on internally," Glashofer said. Many times, certain diseases, such as those in the liver and kidney, can lead to changes in a person's nails, as can starting certain medications, he said.

The lines will all grow out over the course of months, Glashofer said. The man in the new case went on to complete two more rounds of chemotherapy. By six months after his last round of treatment, his fingernails had completely returned to normal, according to the report.