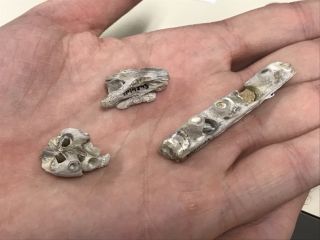 The newborn Tylosaurus bones are so small that they fit on a person's hand. Here, you can see (from left to right) the partial snout with teeth and tooth bases, the partial braincase, and a section of the upper jaw with tooth bases.
(Image: © Christina Byrd, paleontology collections manager at the Sternberg Museum of Natural History in Hays, Kansas)

About 85 million years ago, when a vast sea covered Kansas, a wee, little sea monster died almost immediately after it was born.

Despite its short life, this newborn, which head to tail, was as long as André the Giant was tall (well, it was tiny compared to its parents) is making waves today; a new analysis of its fossils reveals that it's the smallest Tylosaurus — a type of mosasaur, a fearsome marine reptile that lived during the dinosaur age — on record.

But it took years and meticulous detective work for researchers to identify this creature as a Tylosaurus. Paleontologists made the ID by examining tiny broken pieces of the creature's snout, braincase and upper jaw, the only fossils of the animal they could find, a new study reports. [T-Rex of the Seas: A Mosasaur Gallery]

When the tiny leviathan's remains were found in the Smoky Hill Chalk Member of western Kansas, in 1991, researchers thought it was a Platecarpus. This medium-size genus of mosasaur had a short, rounded snout and could grow to almost 20 feet (6 meters) long.

But the new analysis revealed that the remains belonged to a much larger genus: Tylosaurus, said study lead researcher Takuya Konishi, an assistant professor-educator in the Department of Biological Sciences at the University of Cincinnati. This monster of a mosasaur could grow up to 42 feet (13 m) in length, or nearly as long as a semitrailer.

It didn't hurt that Konishi had done his dissertation on the Platecarpus, so he knew the beasts' anatomy inside and out. A few other clues indicated that the wee babe was a Tylosaurus, one of the largest mosasaurs to swim in the Western Interior Seaway — a giant waterway that covered much of the U.S. Midwest and South from about 100 million to about 75 million years ago, Konishi told Live Science.

The biggest clue was the newborn's snout. The Tylosaurus is famous (at least among paleontologists) for its long snout, which is filled with sharp teeth, except for at the tip. Tylosaurus may have used this long, toothless tip as a battering ram to stun and wound prey, much like the orca whale (Orcinus orca) does today, Konishi said.

However, the baby mosasaur didn't have a toothless, cone-shaped tip on its snout. An intensive analysis revealed that the creature had a teeny toothless portion on its snout. This indicates that Tylosaurus wasn't born with its conical, trademark snout, but rather sprouted one between babyhood and adolescence, Konishi said.

In addition, the newborn's braincase looked like that of a Tylosaurus, as did the animal's slender teeth, the spacing and pattern of its tooth layout, and its quadrate — a question-mark-shaped bone at the back of the jaw that holds the jaw joint, Konishi said.

When it was alive, the babe's skull would have measured about 1 foot long (30 centimeters) and its entire body would have spanned about 7.2 feet (2.2 meters) long, making it about one-sixth the size of an adult, Konishi said. Mosasaurs bore live young (meaning these reptiles, which are not dinosaurs, didn't lay eggs), and the infant's small size suggests that it didn't live long.

"I'm thinking that this came out and somehow, miraculously, it got preserved and then discovered," Konishi said.

Despite the intensive analysis, however, Konishi and his colleagues couldn't determine the infant's species. There are two Tylosaurus species known from that time and region — T. nepaeolicus and T. proriger — but without more-developed body parts, it's anyone's guess which species the baby belongs to, Konishi said.

The study will be published online Friday (Oct. 11) in the Journal of Vertebrate Paleontology.