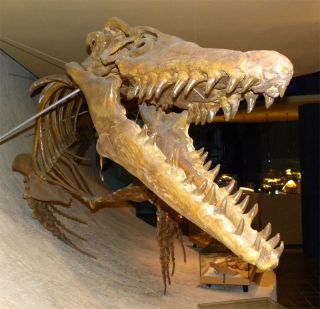 The first mosasaur was discovered in the 18th century. Scientists are now studying how their bodies changed as they adapted to swimming in the open ocean and became top marine predators. (Shown here: a mosasaurus skeleton at the Maastricht Natural History Museum, The Netherlands.)
(Image: © Mark A. Wilson, Public Domain.)

At a time when dinosaurs ruled the land, mosasaurs, a type of swimming reptile related to modern Komodo dragons, came to dominate the seas. Within the span of roughly 27 million years, these predators transformed from an animal with limited swimming ability and limbs still meant for walking into a sleek, fishlike form.

Now, a new study reveals the evolutionary details behind this transformation, which turned the mosasaurs into swimming machines and fearsome predators, the marine equivalent of Tyrannosaurus rex, that may even have decimated the large ginsu sharks of the time. [T.-Rex of the Seas: A Mosasaur Gallery]

Since the discovery of the first mosasaur in the late 18th century, they have been generally depicted as slender, serpentine animals with narrow, straight tails, like that of the modern sea snake, said Johan Lindgren, the lead researcher and a paleontologist at Lund University. While mosasaurs appear to have started out this way after their ancestors first arrived in coastal waters, they did not keep this form.

Lindgren and his colleagues charted anatomical changes in fossils from the tails of four types of mosasaurs at different stages of adaptation to their ocean life, from the small Dallasaurus, still largely built for life on land, to Plotosaurus, which had ridges on its small scales to channel water and a dolphin-shaped body, according to Lindgren.

They also looked at modern animals — lizards, sea snakes and sharks. While mosasaur fossils have been found around the world, preserved soft tissue from their tails is virtually unknown, so modern animals helped the researchers fill in the gaps.

In sharks and ichthyosaurs, the backbone extends into one of the tail lobes, and based on what he saw in the fossils and the living animals, Lindgren believes the same structure — a two-lobed, crescent tail — evolved in mosasaurs over time.

His research also documented other changes: The tail became regionalized, with sections of vertebrae adapting to serve a particular purpose, becoming more robust at the base of the tail to anchor it, for example. Other changes, including the shortening of the bodies of the vertebrae, made the tail more powerful and less flexible. In addition, their extremities became less like feet and more like paddles.

The tail would've resembled that on whales, sharks and some ichthyosaurs — another fishlike marine reptile that disappeared from the Cretaceous seas as mosasaurs arrived, according to Lindgren and his colleagues.

Mike Everhart, adjunct curator of paleontology at the Sternberg Museum of Natural History in Hays, Kan., said the study added detail to what was already known about mosasaurs' adaptation, but he did not entirely agree with Lindgren's conclusion.

"There is no evidence I have seen for an upper tail lobe that would make them more ichthyosaur-like than we currently envision them to be," Everhart said. "We know they were well adapted to living in the ocean. … They basically took over the ocean."

The rise to the top

The changes in mosasaurs' bodies were crucial to their rise to the top of the late Cretaceous marine food chain, according to Lindgren.

Dallasaurus was small, roughly 5 feet (1.5 meters) long, and swam like an eel or sea snake, its spine curving like a sine wave to either side. This type of swimming works for ambush predators, because it allows them a burst of speed, but it's not useful over sustained periods.

Mosasaurs' anatomical changes added new efficiency to their swimming by allowing them to use just part of their body, the tail, to propel them through the water. This allowed them to chase down their prey.

Mosasaurs' ancestors were most likely similar to marine iguanas of the modern Galapagos Islands, land animals that went into the ocean to feed, according to Everhart. They gave rise to mosasaurs roughly 90 million years ago in waters already dominated by sharks, capable of feeding on whatever they wanted, including mosasaurs.

Within a few million years, mosasaurs got larger, and the roughly 22-foot (6.5- to 7- meter) ginsu shark, Cretoxyrhina mantelli, disappeared. There is no smoking gun, Everhart writes on his website, Oceans of Kansas Paleontology, but based on modern sharks' vulnerability to fishing, it is possible that mosasaurs, which grew as large as 56 feet (17 meters), may have eaten young ginsu sharks, and the population was unable to recover.

Their reign didn't last, however. Mosasaurs died out with the dinosaurs during the Cretaceous-Tertiary extinction 65.5 million years ago.

The study appears in the Summer 2011 issue of the journal Paleobiology.