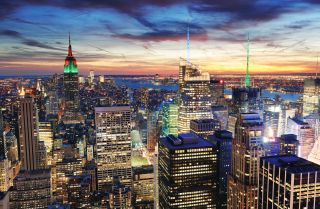 Flu epidemics in small towns are bad, but at least researchers understand them. A new paper published today (Oct. 5) in the journal Science shows that dense urban centers in the United States have lost a lot of the natural defenses that keep the flu from rampaging year-round through the population. And that causes the flu to behave in ways scientists are just beginning to understand.

Under normal circumstances, the researchers wrote, the flu is contained to the colder, dryer parts of the year. That's because the virus spreads through the air; when a sick person coughs and sneezes and otherwise expels the flu into the air, it can survive long enough to infect someone else nearby. But the humid, warmer months of the year are bad for the virus. It can't survive exposure to that wet air as long, and struggles to spread from person to person. So flu peaks in winter epidemics and largely subsides in the summer. [Flu Shot Facts & Side Effects (Updated for 2018-2019)]

In America's big cities though, the researchers found, this seaasonal, natural flu regulation has broken down. People are so frequently packed so closely together that the flu never really loses its ability to spread through the population. All that humidity in the air is less of a problem for the virus when it has to travel just a few inches to reach the next person.

"This does not show that some cities are safer than others for flu. Rather, it shows the relative difference in the timing of cases," study co-author Cecile Viboud, a staff scientist at the National Institutes of Health, said in a statement.

In big cities, the researchers found, the flu tends to wander through the population all year, increasing less in the winter and decreasing less in the summer. That means that a lot of public health workers' assumptions about how to control the flu in those contexts are likely wrong.

Jacco Wallinga, a researcher at the Center for Infectious Disease Control in the Netherlands who was not involved in the original study, wrote a commentary also published in Science on these results. He said that this finding likely means that resources for combatting concentrated flu epidemics should go to smaller cities. Larger cities should likely become sites for long-term flu monitoring and treatment to help scientists understand how the disease is changing from one year to the next, said Wallinga, who is also at Leiden University Medical Center in the Netherlands.

The task of figuring out the best ways to combat the flu remains urgent, the study researchers said. Last winter, 80,000 people died from influenza  in the U.S., the most since the flu season of 1976-1977.