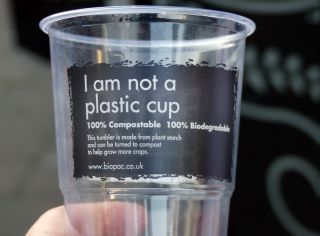 Compostable products are all the rage these days. But what happens to these items — including compostable straws and silverware — when they're thrown into a landfill instead of a compost heap?

The answer is not as green as you might think.

The composting process requires oxygen and, for the most part, landfills are sealed, airtight — and therefore oxygen-free — containers within the ground. "Since landfill conditions are generally anaerobic [i.e., without oxygen], these materials do not 'compost'; instead they either persist or break down anaerobically," Peter Canepa, a life cycle assessment specialist with the Department of Environmental Quality in Oregon, told Live Science in an email. [The Science Behind Composting]

But another study found that PLA doesn't break down at all in a landfill and therefore does not produce significant greenhouse gas emissions, Canepa said. What's clear is that if a compostable item, such as a straw, winds up in the trash, it will not be composted.

So, what happens when compostables land in the correct place — that is, the compost heap? The answer depends on the composting setup.

In the lab, products certified by the Biodegradable Products Institute (BPI) break down in under 12 weeks, or 84 days, Rhodes Yepsen, executive director of BPI, an organization that certifies compostable materials, told Live Science. In real-world composting situations, these products likely break down more quickly, he said.

Despite this, most commercial composting facilities do not accept compostable dishware, Canepa said.

"In theory, these materials should compost at a commercial composting facility," Canepa said."In reality, the majority of dedicated composting facilities in the U.S. accept only yard trimmings and similar organic refuse."

This "no dishware" policy may explain why many compostable food-service items end up in the landfill. In all, about half of municipal solid waste (trash from residential, commercial and institutional sources) in the U.S. ends up in the landfill, "while composting accounts for just under 9 percent," Canepa said, quoting Environmental Protection Agency figures for 2015.

And very little of that 9 percent iscompostable dishware. Breakdowns show thatabout 91 percent of the composted material — which did not include backyard composting — was yard waste and 9 percent was food, Canepa said.

However, some green superstars are composting dishware on their own. For instance, on Governor's Island, in New York City, the nonprofit Earth Matter accepts and composts compostable dishware, along with food scraps and yard waste. It has successfully broken down compostable dishware both in a large-scale operation and, to a lesser extent, in backyard devices. [Why Doesn't Plastic Biodegrade?]

Can compostable dishware be recycled?

So, can compostable dishware be recycled?

"Technically, it is possible to 'recycle' PLA and other bioplastics mechanically like other plastics, but realistically, this is a long way off," Yepsen told Live Science in an email. As is the case for all plastics, PLA can be recycled only once it's been separated from other types of plastics, and visually, it's hard to tell a PLA cup from one made of a conventional plastic, Yepsen said.

There are devices that distinguish PLA from other plastics optically (using light), but there isn't usually enough PLA in the recycling mix to warrant doing that, Yepsen said.

"We want compostable plastics to go in the composting bin, and if that's not available, they should go in the trash," Yepsen said.

Given these challenges, are compostable service items still environmentally friendly?

Some (take this TreeHugger article, for example) argue that compostable materials are better for the environment than conventional ones, even if both wind up in the landfill, because the compostable items were made from renewable resources, such as corn, rather than from non-renewable, petroleum-based plastic. Yepsen is in this camp. "It depends, but most compostable plastic food-service items are bio-based, which means they are displacing fossil-based ingredients with renewable sources," he said. "Some compostable plastics also boast less toxicity compared to their conventional counterparts."

But, according to Canepa, "The short answer is, probably not."

An August 2018 report that Canepa co-authored found that compostable dishware items that were composted tended to have higher environmental impacts across their life cycles than non-compostable equivalents.

Yepsen, however, does not believe that life-cycle analyses alone can answer which products are better for the environment. "LCAs are very powerful tools but they should not be used as a sole justification of whether an item or product is good or bad, they are data points to be considered in the context of a broader system, such as the circular economy and working towards zero waste," he said. [What Happens Inside a Landfill?]

What can be done to ensure that compostable dishware actually winds up in the compost? "More composting infrastructure and programs to collect food scraps mixed with compostable products is the biggest thing we need!" Yepsen said.

Canepa said the bigger question is how single-use items can be avoided.

"I would posit that the end goal here is to reduce the impact we have on the planet and not simply compost more stuff," Canepa said. "Who knows, we may even find some pleasure in taking 15 minutes out of the day to sit down and enjoy an iced coffee out of a reusable glass (straw-free)."