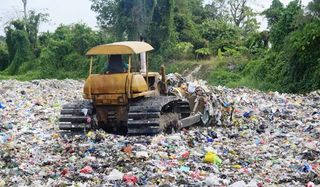 Grease-soaked napkins, cat food cans and banana peels can go many places after you throw them out recycling centers, incinerators or even a compost pile . But more than half of America's garbage is bound for a landfill, according to the National Solid Wastes Management Association.

In a modern landfill, tightly packed mounds of waste are sealed under a rubber and clay barrier, and over a liner that keeps liquids from seeping out.

For a household trash landfill (called a municipal solid waste landfill), the ground is lined first with clay and then with a skin of flexible plastic about half an inch (1 centimeter) thick. Over this, drains and pipes collect a liquid called leachate, which is the contaminated fluid that trickles out of the body of the landfill.

Drained leachate is gathered in pools, allowed to settle and treated as wastewater before being released. In 2008, 276 million gallons (1 billion liters) of leachate were collected from New York's landfills, according to the New York State Department of Environmental Conservation.

When the landfill has reached its capacity, the waste is covered with clay and another plastic shield. Above that, several feet of dirt fill is topped with soil and plants, according to New York's DEC. Rainwater that falls on the landfill runs through the layer of dirt and vegetation and over the protective plastic to collection pools.

Inside the landfill, the trash layer forms a gently sloped hill, which can reach more than 150 feet (46 meters) thick, according to New York's DEC. According to the NSWMA, modern landfills require soil to be added to cover fresh additions of waste every day. The solid waste layer becomes laced with these strips of dirt.

Landfills are not designed to break down waste, only to store it, according to the NSWMA. But garbage in a landfill does decompose, albeit slowly and in a sealed, oxygen-free environment. Because of the lack of oxygen, bacteria in the waste produce methane gas, which is highly flammable and dangerous if allowed to collect underground. It is also a potent greenhouse gas and contributes to global warming.

Modern landfill systems collect methane in a layer of pipes placed above the solid waste layer. According to the NYDEC, some landfills vent this methane into the air. In others, it is collected to sell or burn as a source of energy.

Much of the trash that ends up in landfills can also be recycled or reused in other ways. For example, according to Steven Cohen, executive director of Columbia University's Earth Institute, more than 15 percent of New York's garbage is food and yard waste that could have been composted.