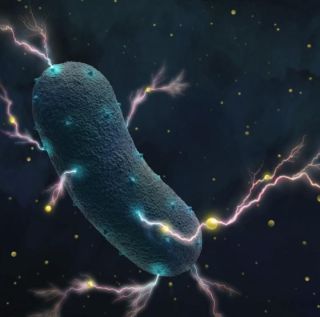 Some bacteria, like Listeria monocytogenes, can generate electricity. These bacteria transport electrons through the cell wall into the surrounding environments, with help from flavin molecules (shown in yellow).
(Image: © Amy Cao graphic. Copyright UC Berkeley.)

There may not be butterflies in your stomach, but there are certainly sparks in your gut.

Some types of bacteria that are either commonly consumed or already found in our guts can create electricity, according to a new study published Wednesday (Sept. 12) in the Journal Nature.

Electricity-generating, or "electrogenic," bacteria aren't something new — they can be found in places far away from us, like at the bottom of lakes, said senior author Daniel Portnoy, a microbiologist at the University of California, Berkeley. [5 Ways Gut Bacteria Affect Your Health]

But until now, scientists had no idea that bacteria found in decaying plants or in mammals, especially farm animals, could also generate electricity — and in a much simpler manner, Portnoy said.

In the lab, Portnoy and his team first grew a batch of Listeria monocytogenes, a species of bacteria, that we often eat that sometimes causes an infection called listeriosis. This type of food poisoning typically is most dangerous for those with weakened immune systems, pregnant women (it can cause miscarriages), newborns and elderly people, according to the Centers for Disease Control and Prevention.

By placing the bacteria in an electrochemical chamber and capturing the generated electrons with a wire, or electrode, the team found that these foodborne bacteria created an electrical current.

There are several reasons why some bacteria generate electricity, such as to remove electrons produced by metabolism, according to a statement. But the main purpose is to create energy, Portnoy said.

But Listeria monocytogenes has "other ways of generating energy too," such as through using oxygen, said lead author Sam Light, a postdoctoral researcher at the University of California, Berkeley. This electricity-generating process is "probably a back-up system that they use under certain conditions." For example, they may deploy it in low-oxygen conditions of the gut.

The researchers screened mutated bacteria — those with missing or altered genes — to identify which genes were necessary for the bacteria to produce electricity. Those genes in turn code for certain proteins that are key to producing electricity.

They found that the system these bacteria used — a cascade of proteins that carry the electrons out of the bacteria — was much simpler than systems other electrogenic bacteria (such as those living at the bottom of a lake) use.

Most other previous systems were found in gram-negative bacteria, or those with a cell wall composed of two layers that separates the inside from the environment. These recently analyzed bacteria are gram-positive, which means their cell walls have only one layer. "That means there's one less hurdle," for the electrons to reach the outside, Light told Live Science.

But once the electrons do reach the outside, it's unclear where they go. Electrogenic bacteria elsewhere typically transfer the electrons to minerals like iron or manganese in their environment. In the research team's experiments, the electrons flowed into the electrode. In the gut, a number of different molecules, such as iron, could potentially bind to and accept electrons, Light said.

Once they knew which genes were responsible for electricity generation, the team further identified hundreds of other microbes that generate electricity using this simpler process — a number of them commonly reside in the gut, while others are important in fermenting yogurt or serving as probiotics.

In a commentary published in Nature the same day, University of Illinois microbiologists Laty Cahoon and Nancy Freitag, who were not involved in the study, wrote, "It is a shock to the system to consider that microbes might be living highly charged lives in our gut." Knowledge of this new electricity-generating pathway "might create opportunities for the design of bacteria-based energy-generating technologies," the researchers wrote.

There are already efforts to create microbial fuel cells, or batteries that use bacteria to generate electricity using organic matter, like in waste-treatment plants. Because this new process is simpler, there's a chance it can improve such technology, but it's too soon to say for sure, Light said.

He personally is more interested in understanding exactly what is going on in the gut — which molecules receive electrons from the bacteria and how this process affects bacterial survival.