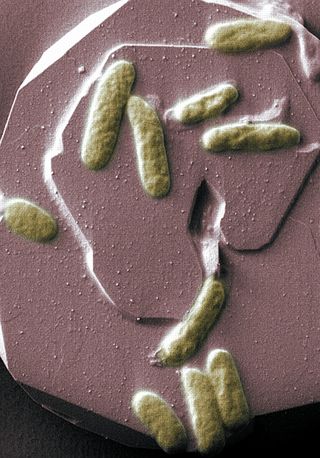 In an important step toward the creation of "bio-batteries," a new study reveals how bacteria produce electricity when proteins in their cell membranes come into contact with a mineral surface.

Scientists have known for some time that a family of marine bacteria known as Shewanella oneidensis, found in deep ocean sediments and soil, can create electrical currents when exposed to heavy metals like iron and manganese.

In a study published today (March 25) in the journal Proceedings of the National Academy of Sciences, researchers show that these proteins can ferry electrons across a membrane at a rate fast enough to produce the energy the bacteria need to survive.

Just as humans breathe oxygen and use it to generate energy, Shewanella bacteria can use minerals like iron oxide for respiration, study co-author Liang Shi, a microbiologist at Pacific Northwest National Laboratory in Richland, Wash., told LiveScience. The bacteria are known to produce a current by shuttling electrons across their cell membranes, "but how this electron transfer from bacteria to mineral occurs is not well understood," Shi said.

There are two main possibilities for how it happens: The membrane proteins might transfer electrons directly to the mineral surface, or the proteins might use other molecules to help them carry electrons across the cell membrane.

To show how membrane proteins in these bacteria produce an electric current, researchers created a bubblelike structure of fatty molecules studded with these proteins, which mimicked the bacteria's cell membrane. It's much easier to study these bubbles than real bacterial cells, which are crowded with other structures, Shi said. The experiments were also run in an oxygen-free environment, since oxygen can interfere with the chemical reactions.

The bubbles contained an electron donor on the inside, and were exposed to an iron-containing mineral on the outside. The researchers measured the speed of the electrical current that developed across the membrane.

The speed of this current was very fast — fast enough to suggest the bacteria use this mechanism to create their electrical currents in nature.

"Our research shows that these proteins can directly 'touch' the mineral surface and produce an electric current, meaning that it is possible for the bacteria to lie on the surface of a metal or mineral and conduct electricity through their cell membranes," study leader Tom Clarke, a biologist at the University of East Anglia, U.K., said in a statement.

Understanding how these bacteria function could enable scientists to develop bio-batteries that could store energy for sensors in remote environments, for example. Conversely, the reverse process — putting electricity into the bacteria — could be used to make the bacteria manufacture useful materials.

Bio-batteries are already being developed, Shi said, though not as part of this research. The next question is how these electron-shuttling proteins fit into the whole system, not just within the lab bubbles, he said.