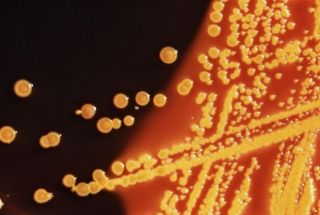 Scientists have long studied bacteria that can clean up toxic waste by eating it. Other bacteria have been employed to produce electricity.

Now scientists have found a two-for-one deal in bacteria that will eat toxic chemicals 24/7 and make electricity to boot.

"The bacteria are capable of continuously generating electricity at levels that could be used to operate small electronic devices," says Charles Milliken of the Medical University of South Carolina, who conducted the research with colleague Harold May. "As long as the bacteria are fed fuel they are able to produce electricity 24 hours a day."

The findings were to be presented today at the 105th General Meeting of the American Society for Microbiology.

The new study involved Desulfitobacteria, already known for their ability to breakdown and detoxify some of the most problematic environmental pollutants, including PCBs and some chemical solvents.

"These bacteria are very diverse in their metabolic capabilities, including the food that they can consume. That means that these bacteria can convert a large number of different food sources into electricity," says Milliken. "The technology could be used to assist in the reclamation of wastewaters, thereby resulting in the removal of waste and generation of electricity."

The bacteria perform their useful tasks while in spore form, a dormant stage of growth that can handle extreme heat, radiation and lack of water -- all useful traits for an organism that might be employed in some of the worst manmade environments.