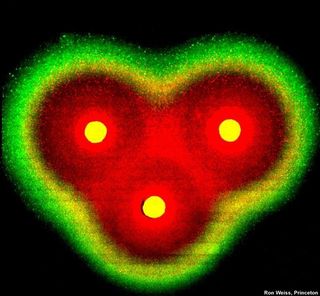 Here the bacteria assemble into a heart shape.

Bacteria have been programmed to behave like computers, assembling themselves into complex shapes based on instructions stuffed into their genes.

The research could lead to smart biological devices that could detect hazardous substances or bioterrorism chemicals, scientists say. Eventually, the process might be used to direct the construction of useful devices or the growth of new tissue, perhaps restoring function to a severed spinal cord.

Many lines of research hold similar promise for controlling biology to build useful things. Predictions do not always come true. What's new about this latest effort is that the bacteria are made to communicate, so that millions or even billions of them gather in a predictable manner.

And there are pictures to prove it.

The researchers programmed E. coli bacteria to emit red or green fluorescent light in response to a signal emitted from another set of E. coli. The living cells were commanded to make a bull's-eye pattern, for example, around central cells based on communication between the bacteria.

Other patterns produced with this new "synthetic biology" technique include a pretty good semblance of a heart and a rudimentary flower pattern.

The work was led by Ron Weiss, an assistant professor of electrical engineering and molecular biology at Princeton University.

Weiss and his colleagues engineer a special segment of DNA, the blueprints for any cell's operations. The segment is called a plasmid.

"You have a segment of DNA that dictates when proteins should be made and under what conditions," Weiss told LiveScience. The plasmid is inserted into a cell, and "the cell then executes the set of instructions."

While most real-world applications of the technique are likely many years away, Weiss said it might be used in three to five years to make devices that could detect bioterrorism chemicals.

The bacteria "have an exquisite capability to sense molecules in the environment," he said. "The bull's-eye could tell you: This is where the anthrax is."

The study is detailed in April 28 issue of the journal Nature.

In a paper March 8 in the Proceedings of the National Academy of Sciences, another team led by Weiss showed they could insert DNA into cells to make them behave like digital circuits. The cells could be made to perform basic mathematical logic. The latest work expands this concept to vast numbers of bacteria responding in concert.

"Here we're showing an integrated package where the cells have an ability to send messages and other cells have the ability to act on these messages," Weiss said.